Taliban lists all girls over 15 in Afghanistan 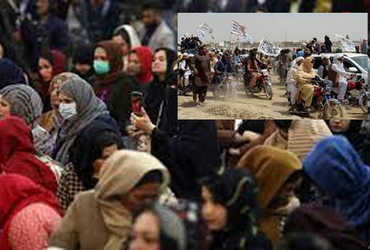 Kabul: The situation in Afghanistan is getting worse day by day. Taliban terrorists are treating women very brutally. There have been incidents of girls being dragged from home. Meanwhile, Taliban militants have also prepared a list of girls above 15 years of age.

Taliban militants have sent a letter to local leaders in areas of Afghanistan that are under the Taliban, asking them to list unmarried teenagers and young women over the age of 15. The Taliban have also been ordered to list widows under the age of 45. A copy of the Taliban letter is circulating.

The non-Muslim girls are deported to Waziristan, Pakistan, where they are converted and handed over to Taliban militants. These terrorists sexually exploit them. Meanwhile, a video of a Taliban terrorist has also gone viral.

As can be seen in the video, a Taliban terrorist brutally treats a young woman and molests her in the presence of several other men as well as women. The girl opposed this and was pushed away by Taliban militants in front of the family. In this way, Taliban terrorists make women sex slaves.