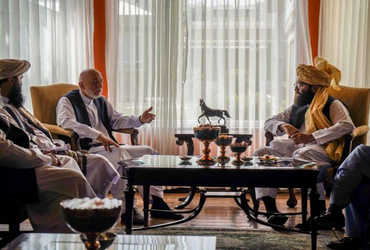 The situation is dire due to terrorists

One group belongs to Abdul Ghani Baradar and the other group is Anas Haqqani: a cut-throat rivalry between the two groups

Kabul: After capturing 90 percent of Afghanistan, it now looks like the Taliban will form their government, but the incidents and pictures that have come out in the media before any official announcement to form the government raise many questions.

Hamid Karzai was the President of Afghanistan 20 years ago when the Taliban was defeated. Now, photos released today show Karzai in talks with Taliban leaders on government formation.

After this incident, various types of apprehensions and speculations started. There was talk in some political circles that the Taliban leaders have split into two factions. One group is of Abdul Ghani Baradar who has returned to Afghanistan after 20 years, while the other group is of Anus Haqqani.

As the race for the presidency of Afghanistan is frozen between the two leaders, these leaders have become more and more active in securing the support of the Taliban. Meanwhile, Amrulla Saleh has declared himself the President of the country. He made this announcement on Tuesday. Prior to the Taliban victory, Ashraf was the deputy chairman of Ashraf Ghani’s government.