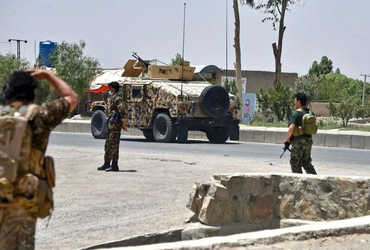 There is a civil war in Afghanistan between the Afghan army and the Taliban. Fierce fighting has erupted between the Taliban and Afghan forces over control of several major Afghan cities. However, thousands of civilians are falling prey to this war. More than 50 civilians have been killed after Taliban militants planted roadside bombs at a military base in southern Afghanistan. At least eight people have been killed and 30 others injured in a bombing near the Afghan capital, Kabul. The Defense Minister is safe though.

The United Nations says the Taliban have planted roadside bombs in an attempt to capture a base in southern Afghanistan, killing more than 50 civilians. A local resident said bodies of people had fallen on the streets. These are the corpses of civilians we don’t know about the Taliban. Fearing the Taliban, many families have fled for their lives. The Taliban want to dominate the capital of Helmand province. Helmand was once the center of American and British military operations. So this area is very important.

At least eight people have been killed in a Taliban bombing near the Afghan capital, Kabul. The attacker appeared in front of a mosque in Kabul later in the afternoon. Four Taliban militants were killed in the clashes that followed. Taliban spokesman Zabihullah Mujahid claimed responsibility for the attack in Kabul. They claimed that they would continue their attacks to capture the provincial capitals of southwestern Afghanistan.

Meanwhile, Afghanistan on Wednesday admitted that Taliban militants in collusion with Pakistan-based terror group Lashkar-e-Taiba have wreaked havoc in their country. In an interview with ambassadors from neighboring states, Afghan Foreign Minister Hanif Atmar said Taliban violence has so far killed 3,000 people and displaced more than 300,000. Taliban terrorists are wreaking havoc all over the country along with Pakistan based terrorist organization Lashkar-e-Taiba, Tehreek-e-Taliban Pakistan, Al Qaeda, East Turkistan, Islamic Movement Ansarullah etc. “More than 100 people have been killed in the Spin Boldak area near Pakistan and girls are being forced to marry terrorists,” Atmar said. More than 200 infrastructure has been demolished in areas controlled by the Taliban. Afghanistan has sought the help of the international community, including India, to fight terrorism. Atmar said the Taliban needed a serious response at the next Doha meeting.