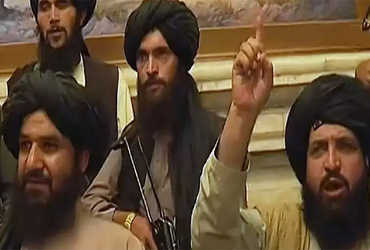 – As the governor of Afghanistan’s central bank fled the country, the Afghan currency fell 1.7 percent to 83.50.

Kabul: The Taliban on Tuesday announced an apology for everyone, including its opponents, as it underwent a change of image after horrific scenes of thousands of people fleeing the international airport after the Taliban seized power in Kabul. He also invited women to join the government according to Islamic law, as he wanted to forget the plight of women under the previous Taliban regime. A Taliban leader showed his benevolent face as well as interviewed the female anchor. The whole world is shocked by this order of the Taliban. Yet those who have seen the previous regime of the Taliban still fear them.

Taliban spokesman Zabihullah Mujahid held a press conference for the first time since the occupation of Afghanistan. In which he promised from giving rights to women to providing security to foreign embassies.

Having captured most of Afghanistan’s cities without a fight, the Taliban have tried to present a modern image in contrast to their brutal regime in the late 1990s. But many Afghans are skeptical about his new image. The older generation is remembering the extremist ideology of the Taliban. Before the United States invaded Afghanistan, stone-pelting and public executions were common.

Enamullah Sanamgani, a member of the Taliban’s Cultural Commission, has commented on the regime at the federal level for the first time. He said that all Afghans in the Islamic Emirate of Afghanistan would be forgiven. Meanwhile, no major incidents of harassment or fighting have been reported in Kabul so far.

Emanullah Samangani, a member of the Taliban’s cultural commission, has indicated how he will rule nationally, despite the ambiguity of Tuesday announcing a public apology across Afghanistan.

Taliban leaders are still in talks with political leaders of the country’s former government. No official announcement of transfer of power has been made yet. Other Taliban leaders said they do not want to take revenge on the Afghan government or anyone who supports foreign forces. According to sources, the Taliban also has a list of people who want to cooperate with the government.

Samangani said women in Afghanistan have suffered the most in more than 30 years. The Islamic Emirate of Afghanistan does not want women to suffer any longer. He also invited women to join the system of government under Sharia law. He said that the structure of the government is not yet clear, but based on experience, I can say that it will be completely Islamic-led and all parties will be involved.

This time it has surprised everyone. This attitude of the Taliban shows that this time it has adopted a softer mood than before and has shown a tendency to compromise with the radical attitude. However, only time will tell whether this is just a statement issued by the Taliban or whether it is to be implemented on a real basis.

Meanwhile, Ajmal Ahmadi, the acting governor of Afghanistan’s central bank, has also fled the country fearing the Taliban. As a result, there has been a record decline in the Afghan currency in the country. According to Bloomberg data, the Afghan currency closed down 1.6 per cent against the dollar on Tuesday at 8.2018.

– All employees of the Indian Embassy returned to India: 192 Indians were brought in two phases

Hundreds of Indians have also been trapped in Afghanistan during the coup. More than 200 Sikh and Hindu families have taken refuge in a gurdwara in Kabul. The good news is that they are all safe. On the other hand, the employees of the Indian Embassy in Kabul have been brought back to India safely. Meanwhile, Prime Minister Modi called an important meeting at the PM’s residence on the issue of Afghanistan.

He said some representatives of the Taliban had come to the gurdwara to investigate the families of the asylum seekers. The Taliban representatives have also assured the management of the Kabul gurdwara that there will be no harm to the people living there. Parjit Singh Sarna, former chairman of Delhi Sikh Gurdwara Management Committee, said that the central government should make efforts to bring Sikh and Hindu families living in Afghanistan to India through talks with Taliban representatives.

On the other hand, two days after the Taliban seized power in Kabul, all Indian Embassy personnel were brought to India in a C-17 heavy lift aircraft of the Indian Air Force. “We have brought back 18 Indians from Afghanistan in two phases,” India’s Ambassador to Afghanistan Rudendra Tandon said. On Tuesday, the plane carrying 150 Indians reached New Delhi from Kabul via Jamnagar.

Meanwhile, Prime Minister Narendra Modi called a high-level meeting at his residence on the situation in Afghanistan after the Taliban came to power, which was attended by Home Minister Amit Shah, Defense Minister Rajnath Singh, NS Ajit Doval and Finance Minister Nirmala Sitharaman. .

In view of the prevailing situation in Afghanistan, India on Tuesday announced that Afghans wishing to come to India will be granted emergency e-visas for six months. India said Afghans of any religion will be able to apply online for e-emergency ex-miss visas. In view of the current situation in Afghanistan, the Ministry of External Affairs will provide the visa. India has launched a new category of electronic visa ‘e-emergency X-MISK visa’ to provide asylum to people fearing Taliban, which will expedite the disposal of visa applications for entry into India. A Home Ministry spokesperson said with the closure of the Indian mission in Afghanistan, visas would be available online and applications would be scrutinized and processed in New Delhi. Initially this visa will be valid for six months.

– Panjshir province never fell into the hands of Taliban, could not capture Russia and America

In Afghanistan, the Taliban have captured most of the country, including Kabul. But the Taliban was never able to capture Panjshir, the stronghold of Ahmed Shah Masood, the former commander of the Northern Alliance. Amrullah Saleh, the Vice President of Afghanistan, also comes from this area. He has declared himself the President of Afghanistan and called on citizens to stand up to fight the Taliban. This valley, located near Kabul, the capital of Afghanistan, is so dangerous that the Taliban has not been able to capture it from 1901 to 2021. Not only this, the Soviet Union and US forces have only been able to conduct air strikes in this area. In view of the geographical location of the area, he never took any land action.

Amrullah Saleh, the Vice President of Afghanistan, also comes from this area. Although President Abdul Ghani fled abroad, Amarulla is marching towards his stronghold, Panjshir. He said that according to the Constitution of Afghanistan, the Vice President becomes the acting President in the event of the President’s absence, flight, resignation or death. I am currently in the country and am the legitimate President. I will never bow down to Taliban terrorists and neither will I under any circumstances. I will not betray the spirit and legacy of our hero Ahmed Shah Masood, Commander Legend and Guide.

Saleh criticized US President Biden, saying it was pointless to discuss the issue with him. We Afghans must prove that Afghanistan is not Vietnam and the Taliban are not remotely like the Vietnamese communists. US-NATO has lost courage, but we have not lost our spirits yet. A picture has also surfaced from Saleh’s Panjshir, in which he is seen sitting and discussing with many people.

The valley in north-central Afghanistan was not occupied by the Soviet Union in the 1980s or the Taliban in the 1990s. However, Ahmed Shah Masood, better known as Sher-e-Panjshir, was assassinated by the Taliban and Al Qaeda on September 9, 2001. Now Ahmed Masood is facing the Taliban after his father.