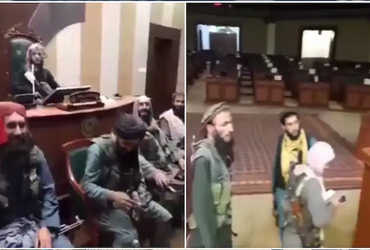 There is already speculation about what will happen to Afghanistan and how the Taliban will rule in the coming days. Along with the Rashtrapati Bhavan, the Taliban have also captured the Parliament House. Taliban fighters entered parliament with weapons and sat in the speaker’s chair inside the parliament, which is considered as sacred as a temple in a democracy. It is worth mentioning here that this Parliament House was built by India and it was inaugurated in 2015 in the presence of PM Modi.

In this video that has gone viral on social media, Taliban fighters are seen waving guns inside the Parliament building. A fighter is seen sitting in the speaker’s chair with a gun, while two weeks ago, the chairs on which the Afghan representatives were sitting are also seen with gunmen.

On Sunday, the Taliban stormed the Rashtrapati Bhavan as soon as they entered Kabul. With these photos, it was announced to the world that the insurgents had carried out their plans even before the process of withdrawing US troops from Afghanistan was completed. President Asraf Ghani left the country and thus began the rule of the Taliban.