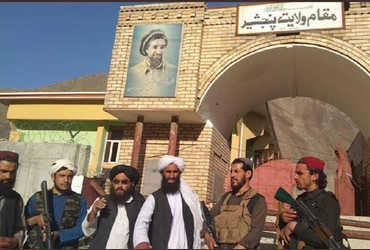 Panjshir province, which is battling the Taliban in Afghanistan, has also finally faced defeat. The latest pictures of Panjshir show that the Taliban have captured the area. The Taliban themselves have claimed that they have completely captured Panjshir. Some photographs have also surfaced, one of which shows a Taliban flag in Panjshir. The second shows the Taliban’s Panjshir standing outside the governor’s office.

It is being claimed by the Taliban that they have also killed the commander in chief of the Resistance Force (Northern Alliance), Saleh Mohammed. Taliban spokesman Zabihullah Mujahid said Afghanistan’s Panjshir province had been completely occupied.

Panjshir was the last province that was not occupied by the Taliban. Earlier on August 15, the Taliban captured the whole of Afghanistan with a victory over Kabul.

In Panjshir, the fighters started looking weak from Sunday night itself. Resistance Front spokesman and close aide of Ahmed Masood fighting the Taliban in the Valley, Faheem Dashti, also died on Sunday. It has been learned that Afghanistan’s Vice President Amrullah Saleh is currently safe at an undisclosed location. While Asad Mahmood is in Tajikistan for the last 3 days.

Parisian exhibition “Jews in the Orient”

Festivals and tours without masks with a 2G model? |

Microsoft wants to turn Clippy into an emoji and they launch a Twitter poll with nearly 130,000 likes