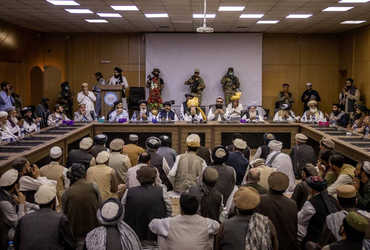 Within a fortnight of the withdrawal of US troops from Afghanistan, the Taliban, which has been occupying the entire country at gunpoint, is mired in forming a new government. The Taliban have been in the process of forming a new government since the capture of Kabul on August 15 and the new government was to be announced on Friday, but has been postponed to Saturday and now until next week. It is not clear which groups the Taliban should involve in the formation of a globally accepted inclusive administration in the formation of the new government. Taliban commanders, on the other hand, went into a frenzy of victory with claims of having captured Panjshir, killing 70 people in air gunfire for a celebration on Friday night. However, Ahmed Masood rejected the claim of possession of Panjshir and announced that the Taliban would continue to oppose it.

Taliban spokesman Zabiullah Mujahid said on Saturday that the names of the new government and cabinet members would now be announced next week. He did not specify the reason for the delay in forming the government. However, according to sources, the Taliban regime alone will not be accepted globally. Consequently, discussions are underway with all parties, social groups and all sections of society to ensure fair representation to form an internationally accepted inclusive government.

Kabul’s security in-charge Khalil Haqqani said the new government would include former Afghan prime minister Gulbuddin Hekmatyar and Hashmat Ghani Ahmedzai, brother of fugitive President Ashraf Ghani. The Taliban are capable of securing the country, but they need young, educated Afghans to run the government. The old politicians will reportedly be completely ousted in the new government.

Meanwhile, women in Afghanistan are now taking to the streets against the Taliban for their rights. For the last few days, women have been protesting for their rights for the last 20 years. Women’s demonstrations turned violent in Kabul on Saturday. Under Taliban rule, women who demanded women’s rights in the political system were beaten up by the Taliban. They fired tear gas shells at the women protesting in front of Rashtrapati Bhavan. The Taliban has been opposing these demonstrations of women since the beginning. According to some eyewitnesses, the Taliban also opened fire to disperse the women.

Meanwhile, the Taliban claimed control of Panjshir, the only province in Afghanistan, and fired indiscriminately into the air on Friday night to celebrate the victory, killing 70 people, including children, and injuring 31 others. However, the resistance force, led by Ahmed Masood and Amrullah Saleh, denied the Taliban’s claim, saying that the Taliban was not able to control Panjshir. His protest will continue. On the other hand, late Saturday night there were reports that the Taliban had captured the governor’s house in Panjshir and throughout Afghanistan.