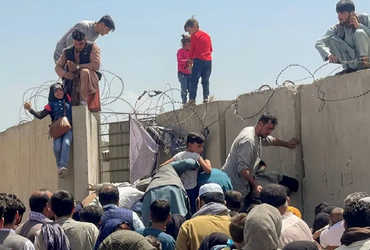 There has been an atmosphere of fear in Afghanistan since the Taliban came to power, especially among men and women who have previously helped the US military.

A large number of people have arrived at the Kabul airport to flee the country to escape the Taliban. American and British soldiers guarding the airport have put up barbed wire fences around the airport.

Airport security guards say women are throwing their children across barbed wire fences to allow any way inside the airport and are urging soldiers to hold the children.

A media report described the experience of the security guards. A British official said it was sad to see the women throwing away the children. Some children were trapped in the barbed wire fence.

However, apart from this, some videos have also gone viral, in which women are seen crying from the other side of the airport wire fencing, “Save us…”.