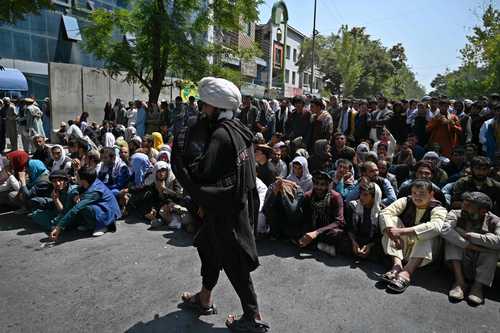 ▲ Dozens of people wait in front of a bank to withdraw cash, under the surveillance of a Taliban fighter, in the Shar-e-Naw neighborhood of Kabul. Afp photo

Some 50 women peacefully placed a wreath in front of the Defense Ministry under the eyes of the elements to honor the Afghan soldiers who fell in the battle against the Taliban. It is the fourth time that women have protested, both in Kabul and in western Herat, to demand their rights in the new Taliban government.

With loudspeakers, they demanded access to education, the right to return to their jobs and participate in the new government of the country. Freedom is our motto. It makes us proud, it read on one of the banners they carried.

We are here to win human rights in Afghanistan, said 20-year-old Maryam Naiby, saying: I love my country. I’ll always be here. As the slogans grew louder, several Taliban officials stepped into the crowd to ask them what they wanted to express.

Flanked by other protesters, Sudaba Kabiri, a 24-year-old university student, told her Taliban interlocutor that the prophet of Islam granted rights to women and that they wanted theirs. The official promised that they would be granted rights, but the protesters, all in their early 20s, were skeptical.

When they reached the presidential palace, near the Ministry of Finance, a dozen members of the Taliban special forces rushed the crowd and dispersed it with gunshots into the air and tear gas. Images posted on social media showed a young woman bleeding from the head, who claimed that the jihadists beat her.

The fundamentalist movement has promised an inclusive government and a more moderate Islamic form of government than when they last ruled the country between 1996 and 2001, but many Afghans, especially women, are skeptical and fear the loss and recession of their acquired rights. the past two decades, in which the country was intervened by US forces, with the support of its Western allies.

For much of the past two weeks, top Islamist leaders have held meetings amid accounts of emerging differences between them. Yesterday they again postponed the presentation of their government, whose composition could give clues about what the next years will be like in Afghanistan, almost three weeks after taking over the country.

This delay could be explained by the situation in Panshir province, north of Kabul, one of the last pockets of armed resistance to the new regime. Since Monday, when the last US troops left the country, the area has been the scene of fighting between the Taliban and the National Front of Resistance (FNR).

On Friday night, in the center of the capital, at least 17 people died and another 41 were injured as a result of the Taliban’s celebration in the face of rumors of a presumed victory in Panshir. The Islamist group have not made any official announcement and the resistance denied that it had fallen because the fighting continued yesterday.

The FNR, which brings together opposition forces loyal to local leader Ahmad Masud, claimed that the Taliban reached the heights of Darband, on the border between Kapisa and Panshir province, but were repelled.

Meanwhile, the Qatari government reported that it partially reopened the Kabul airport for the arrival of flights with humanitarian aid, which has already begun, and added that the first domestic flights to Mazar-i-Sarif and Kandahar have departed since the Taliban takeover. .

Veteran-led rescue groups say President Joe Biden’s administration’s estimate that no more than 200 US citizens were left behind in Afghanistan is too low, and it also overlooks hundreds of legal permanent residents with green cards.

Nearly 33,000 minors were killed or maimed in Afghanistan in the 20-year war, equivalent to an average of one child every five hours, Save the Children said.