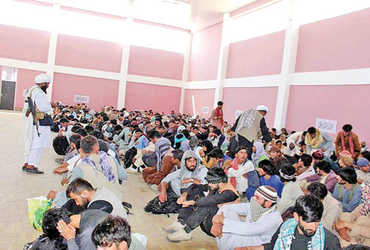 Under pressure from global as well as Pakistan’s spy agency ISI, Taliban is ready for peace talks with Afghan government negotiator in Pakistan. But he has put three harsh conditions for the talks. He called for the unconditional release of all Taliban prisoners lodged in Afghan prisons.

In addition, the Afghan government has asked the United Nations to remove the Taliban from its list of terrorist groups. It also includes stringent conditions such as appointing the Taliban to key positions such as President, Defense Minister, Interior Minister, Army Chief and Head of the NDS. If the Taliban takes over these important positions, the post of prime minister will be formalized.

Meanwhile, the Taliban are reluctant to hold talks with Afghan President Ashraf Ghani. Therefore Prince Mirwais, the son of former King Zaire and chairman of the National Committee for the Protection of Afghan Cultural Heritage, is likely to be appointed as an interlocutor by the Afghan government. The Taliban’s previous meeting with the Afghan government was a failure.

Meanwhile, the Taliban have taken control of northern, western and southern Afghanistan in recent weeks and are now advancing on Kabul. Two-thirds of the country is under the control of Sunni Pashtun fighters. The Taliban also captured Mazar-e-Sharif, Afghanistan’s fourth-largest city, in the northern province on Saturday.

Afghanistan’s President Ashraf Ghani, on the other hand, addressed the nation on Saturday and said that restructuring the army is his government’s priority. Steps are being taken in this direction. Don’t let the war imposed on us cause more deaths.

Taliban arrive at the gates of Kabul

As the Taliban’s dominance in Afghanistan continues to grow, the United States has sent Marine commandos to evacuate its staff and civilians from the US embassy in Kabul, instructing embassy staff to destroy sensitive documents.

The US embassy in Kabul has been instructed to evacuate American citizens as well as destroy objects that could be used by the Taliban as propaganda or the American flag. The notices issued to embassy staff have called for using methods like burning, tearing and throwing documents in the dustbin. The US State Department in Washington has also started preparing for the crisis. And steps have been taken to assist the US Embassy in Kabul.

Britain’s Defense Secretary, Ben Wallace, on the other hand, said that the US decision to withdraw its troops from Afghanistan was a mistake, which gave the Taliban a great opportunity to wreak havoc across the country. Wallace said the deal by former US President Donald Trump’s administration to annex Doha, Qatar was a bad deal. I naturally thought this was a big mistake when dealing with Trump instead of dealing with the Taliban. The international community will probably have to bear the brunt of this mistake.

Embassies do not threaten us

India has done a great job, but don’t underestimate its army: Taliban

The Taliban have captured most of Afghanistan. At such a time, a Taliban spokesman has assured the world that we will not attack the embassies and ambassadors of any country.

Taliban spokesman Mohammad Suhail Shahi praised India’s work in Afghanistan but also warned against sending troops. Amid reports of various countries vacating embassies and recalling their ambassadors, Shaheen said, “There is no threat to any embassy or ambassador from us.”

When asked what would happen to India’s projects in Afghanistan, the spokesperson said, “We appreciate everything we do for the people of Afghanistan.” India has worked for the development, reconstruction and economic prosperity of Afghanistan, such as dams, national and infrastructure development. “We are committed not to allow the use of Afghan soil against any country,” spokesman Mohammad Suhail Shaheen said. However, in a threatening tone, he said that it would not be good for India to come with troops to Afghanistan. We will not take that into account. Everyone has seen the result of military presence of other countries in Afghanistan.