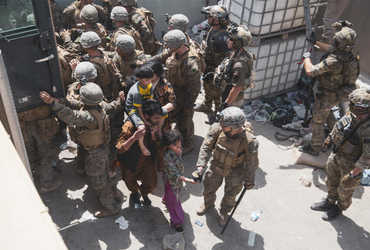 There is an atmosphere of fear in the whole country after the Taliban occupation in Afghanistan. Some people are fleeing the country out of fear. In the midst of all this, some other terrorist organizations are also trying to take advantage of this. Unknown assailants opened fire at Kabul airport on Monday. Three Afghan security personnel were killed and three others were injured.

Crowds are gathering at Kabul airport to board the plane, such as at a bus station or railway compartment. In some pictures that have gone viral on social media, he is seen running on the runway of the plane and at the same time a crowd of people has gathered near him. In such a situation, the crowd gets out of control and the army has to fire.

Earlier this week, a huge crowd gathered at Kabul airport to flee the country and even then there was a stampede. Firing ensued, in which at least five people died. Seven people were killed in the second firing on Sunday.

Taliban attack on women and children in Afghanistan

Afghanistan is once again under Taliban control after 20 years. It has also taken possession of the country’s Rashtrapati Bhavan. The situation there in the country has become dire. People are running away from the country without taking their belongings.