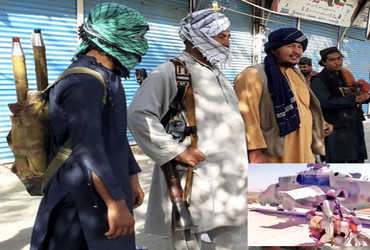 During Modi’s visit, terrorists carried a helicopter that India had gifted to Afghanistan

Now only one province in northeastern Afghanistan is independent, while the rest are controlled by the Taliban. There are 34 provinces in Afghanistan, nine of which have been captured by the Taliban in just six days. On the other hand, at least 450 more Taliban militants have been killed in a recent military attack.

The first was on 6 August, when the Taliban captured the province called Nimroj. After which 7 was Jejwan, 8 was Sar-e-Pul, 8 was Kunduz, 9 was Takhar, Samgan, 10 was Farah, Baglan and 11 was Badakhshan. Herat, Helmand and Kandahar provinces are currently being prepared for Taliban occupation. A frightened Afghan Finance Minister Khalid Payanda resigned and fled the country. He announced his resignation via Twitter.

Afghanistan’s army is proving to be weak at the moment. In this, President Ashraf Ghani has appointed General Hibatullah Alizai in place of General Wali Ahmedzai, Chief of Staff of the Army. An EU official claimed the Taliban had captured 230 of Afghanistan’s 400 districts.

Taliban terrorists are currently preparing to capture Kabul, the capital of Afghanistan. All the highways leading to Kabul are controlled by the Taliban. The Taliban have also captured the area from where Kabul is getting electricity. So now Kabul can fall into the hands of Taliban at any time.

On the other hand, there are reports that the Mi-24 helicopter gifted by India to Afghanistan in 2019 has been confiscated by Taliban terrorists. The Taliban have captured the Kunduz military base. It was at this point that the army placed a Mi-24 attack helicopter which was captured by the Taliban.

The helicopter was abandoned by the Army as it was not fit to fly. Although the army had removed the engine of the helicopter, the terrorists could not use it. At present, nine provinces are controlled by the Taliban in Afghanistan, while there are 11 provinces where both the army and the terrorists are face to face and fierce fighting is going on.

UNICEF says the Taliban have killed 27 children in Kandahar, Khost and Pakhtia. Thus, civilians are now looking for a safe haven out of fear of the Taliban.

Many women ran to escape the terror of Taliban

Imams were tasked with preparing a list of young women and girls between the ages of 15 and 45.

Kabul: Taliban terrorists are now targeting women. According to a report, the Taliban have started kidnapping young women to make them slaves from door to door. Many of the women killed in fear have been forced to flee safely.

According to a report by a website called The Sun, Taliban terrorists are currently kidnapping women. Some women and girls have been enslaved and forced to go door to door to have sex with them. Especially terrorist commanders are forcibly marrying such girls and later making them slaves of sex.

According to a report, militants in Taliban-held areas have asked imams to make a list of young women and widows between the ages of 15 and 45. These women would later be brought before Taliban terrorists and forced to marry them and make them sex slaves.