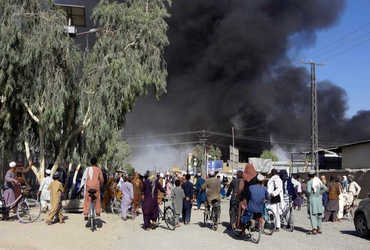 The Taliban, which captured four more cities on Friday, captured the whole of southern Afghanistan and are now rapidly moving towards Kabul. Within two weeks of the US officially announcing the end of the two-decade-long war, the Taliban have become active in dominating the whole of Afghanistan. He also rejected incumbent President Abdul Ghani’s offer to become a partner in power. The Taliban have also captured the capital of Helmand province. Fearing defeat against the Taliban, President Abdul Ghani has expressed the possibility of resigning.

The Taliban recently took control of nine provincial capitals, including Herat and Kandahar, Afghanistan’s second and third largest cities. The Taliban have controlled two-thirds of Afghanistan in the weeks since the United States announced plans to withdraw its forces. Now the Taliban is moving towards Kabul. According to US military intelligence reports, the Taliban could take control of Kabul within 60 days. Looking at the way the Taliban are moving, they will soon be able to take over the whole of Afghanistan.

Meanwhile, India is preparing to expel Hindus and Sikhs from Afghanistan at the earliest. India is yet to decide whether to close its embassy in Kabul or not, but a decision could be taken in the future given the speed at which the Taliban is moving towards Kabul. India recently expelled more than 50 employees and officials from Mazar-e-Sharif. Last year also 40 minorities were brought to India. In view of the deteriorating situation in Afghanistan, the Government of India has directed Indian citizens to return from Afghanistan till the resumption of international flights. India rescues three Indian engineers from Taliban-held territory

The Taliban have captured the capitals of Zabul and Uruzgan provinces, in addition to Helmand in the south. Attaullah Afghan, head of the provincial council in Helmand, said Tabilano took control of the camp after heavy fighting and raised his white flag on government buildings. However, three National Army bases outside Lashkar Gah are still under government control. The head of Zabul province, Ata Jan Hakbayan, said the local capital, Kalat, was falling into Tabilano’s hands. Bismillah Jan Mohammed and Qudratullah Rahimi from Uruzgan province also said government officials in Tirin Kot had surrendered to the Taliban.

Fazil Haq Ehsan, the head of the provincial council in Afghanistan’s western Ghor province, said his capital, Firoz Koh, was also falling into the hands of Taliban militants. President Abdul Ghani is rumored to have resigned in the wake of the Taliban’s growing dominance in Afghanistan. However, the Afghan government has denied these rumours. Meanwhile, Afghan Vice President Saleh was also rumored to have fled to Tajikistan. However, Amrullah Saleh’s office denied the rumours, saying that Amrullah was still in Kabul.

As the Taliban’s dominance in Afghanistan continues to grow, they are imposing their laws on the people. Taliban laws banning women from going outside to growing men’s beards are being reimposed in Afghanistan. The Taliban have banned people from taking the corona vaccine in Paktika, which they control in eastern Afghanistan. According to a report by Afghanistan-based radio and television platform Shamshad News, they also set up a board in this regard at Paktika Regional Hospital. The Taliban took control of the area last week.