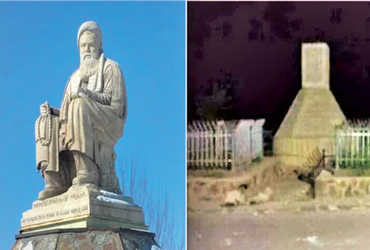 The talk about good governance of the Taliban was unclear

Afghans should hand over weapons to us, not harm anyone: Taliban claim

Kabul: After capturing Afghanistan, Taliban is claiming that it will not be as fanatical as before. However, contrary to what the Taliban is saying, the situation is visible on the ground.

Taliban militants opened fire on a group of people waving the Afghan flag in Jalalabad, Afghanistan. Three people died in this and many others were injured. The video of the incident is also going viral.

Citizens of Jalalabad held a rally on the eve of Afghanistan’s Independence Day and waved their country’s flag, defying the Taliban flag. The Taliban militants present there opened fire on the citizens of their own country, in which two people were killed.

At the same time, all the people present in the rally were beaten to death. Meanwhile, some women in Kabul rallied for their independence and refused to accept the Taliban regime, whose pictures are also going viral.

The Taliban, on the other hand, have ordered their citizens to hand over whatever weapons and ammunition they have and have assured that no innocent civilian will be harmed and the country will be protected.

With time our leaders will come in front of the people, we have nothing to hide. On the other hand, the Taliban has asked its official members not to celebrate the coup in Afghanistan and to remain calm. Although the Taliban is just talking, the reality is different.

The statue was located in Bamiyan province, where the Taliban had previously blown up a 1,500-year-old Buddha statue. Now after two decades in this area, Taliban terrorists have also blown up a statue of Abdul Ali, leader and hero of Shia Muslims.

The United States has said that 3,200 people have been evacuated from Kabul by US forces in Afghanistan so far. Including US citizens and soldiers.

France, on the other hand, helped evacuate 21 Indians from Kabul. Germany has sent 600 soldiers to evacuate its citizens from Afghanistan. Whereas India has said that every Indian from Afghanistan will be brought to India safely.

Earlier, Russian state media had claimed that President Ashraf Ghani, who was fleeing Afghanistan, carried notes in his bag. But due to space constraints, he had to leave a few bags full of notes on the runway. Meanwhile, Anas Haqqani, a member of the Taliban’s political bureau, met with former Afghan President Hamid Karzai and Abdullah Abdullah in Kabul.