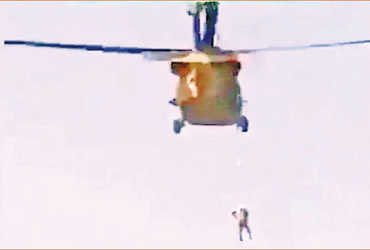 Kabul: With the withdrawal of American troops, the Taliban has returned to its original colors. The Taliban blew up the hanging body of a man on a US plane in Kandahar. The man was killed by the Taliban for helping the United States, and his body was hung from a helicopter.

The video of the entire incident is also going viral. Video taken from a simple mobile camera shows the Taliban flying an American helicopter. Below it is a corpse hanging from a rope.

The Taliban later flew helicopters in several areas with the bodies hanging. And created an atmosphere of fear among the people. There are reports that the man killed was a US ally, whose information was leaked to the Taliban and hanged from a helicopter.

However, some reports claim that it is not clear whether the person is alive or dead. The video of this entire incident has become a topic of discussion all over the world. The United States has deployed several such helicopters to Afghanistan, although many were claimed to be inactive.