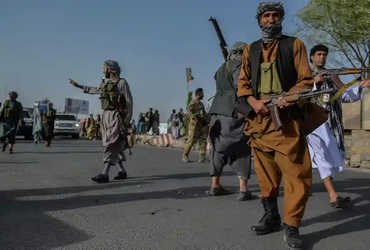 Kabul, Ta. 2
Taliban militants stormed a prison in the southwestern province of Helmand. The attacker was killed in front of a convoy of Afghan security forces shortly after noon. The attacker attacked in front of the police recruitment center later in the afternoon.
A spokesman for Afghanistan’s Defense Ministry said Taliban militants had attacked a district prison in the southwestern province of Helmand. A total of 20 Taliban militants were killed in the attack, but the attack was foiled by security forces. Six terrorists were killed and two others were injured in clashes with security forces.
The Taliban have captured the areas around Helmand. Now the Taliban have started attacks to capture government buildings in Helmand. This attack was done to free the Taliban terrorists who were in jail. The Taliban are planning to seize the governor’s office, the police station and other government buildings.
Meanwhile, it is now being revealed that Pakistan is supporting the Taliban. Canadian leader and former minister Chris Alexander shared a picture of Taliban terrorists trying to infiltrate into Afghanistan from the Pakistani border and tweeted that Pakistan is training the Taliban. The leader accused Pakistan of instigating the Afghanistan war and indirectly being active in the Afghan war.
There were also demonstrations against Pakistan in America. Pashtun citizens living in the US in Afghanistan opposed Pakistan and alleged that Pakistan wanted to disintegrate Afghanistan by supporting the Taliban. Ali Wazir of the Pashtun Tahafuz movement shouted in New York that he had been detained in Pakistan. Ali Wazir is a social activist working for the protection of human rights in Pakistan.
The US government made an important announcement. The program to bring Afghan civilians to the United States to help the US military will continue and such civilians will be brought to the United States safely. The threat of Taliban terrorists to Afghan civilians working for the US military increased after the US decided to leave the country. With this in mind, the United States announced plans to expand its refugee program.