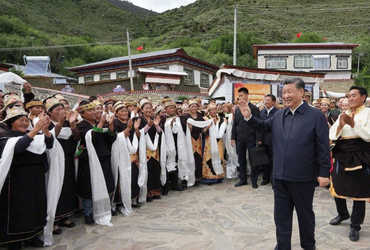 New Delhi: Chinese President Xi Jinping has surprised India by visiting the border town of Ningchi in Tibet, which borders Arunachal Pradesh. Xi Jinping is the first President to visit Tibet. During this he reviewed the operation of the new and strategically important railway line.

Jinping visited the Nyang River Bridge for the construction of the Brahmaputra River. The Brahmaputra River is called the Yarlung Zangbo River in Tibetan. The Nyang is its second largest tributary. He also visited Ningqi city and its railway station to inspect the newly built Sichuan-Tibet Railway.

A video that went viral on social media on Thursday shows that Jinping had also visited Lhasa. His visit was officially confirmed on Friday. This is Jinping’s first visit to the Tibet Autonomous Region since taking over as general secretary of the Communist Party of China in 2014. He visited Tibet in 2011 when he was the Vice President.