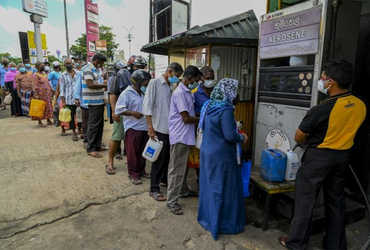 Sri Lanka is facing a difficult economic crisis. Sri Lanka has declared a state of emergency due to the food crisis, as private banks are short of foreign exchange for imports. President Gotabaya Rajapaksa said he had taken steps to prevent hoarding of sugar, rice and other essential food items. Emergency regulations and law enforcement have been ordered.

Rajapaksa has appointed a high-ranking army officer as the commissioner of essential services for the supply of grain, rice, sugar and other consumer goods. The crisis was announced after a sharp rise in prices of sugar, rice, onions and potatoes, while shortages of milk powder, kerosene and cooking gas led to long lines outside shops.

The Sri Lankan government has imposed heavy fines to curb food hoarding. The crisis has come at a time when the country of 21 million people is battling a huge wave of corona virus. More than 200 people die of coronary heart disease in Sri Lanka in a single day.

Sri Lanka’s economy has declined by a record 3.6 percent in 2020 due to the Corona pandemic. In March last year, the government had banned the import of vehicles and other items, including essential spices, edible oils and turmeric, to protect foreign exchange. Importers still say they do not have dollars to buy food and medicine. Importers can buy these food items from outside in dollars only.

Two weeks ago, Sri Lanka’s central bank raised interest rates to strengthen the local currency. Bank data show that Sri Lanka’s foreign reserves declined to 2.2.8 billion at the end of July, from 7.7.5 billion in November 2019. The value of the Sri Lankan currency against the US dollar fell by more than 20 percent when the government took over.

Energy Minister Uday Gamanapila has appealed to motorists to reduce the use of fuels like petrol and diesel so that the country can use its foreign currency to buy essential medicines and corona vaccines.