So much ice melted in Greenland, America submerged in half a meter of water 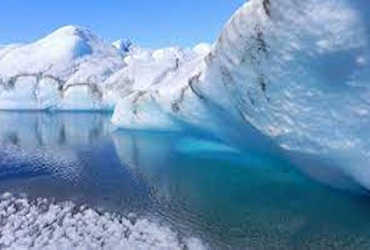 COINHAGEN: Greenland’s vast ice sheet has melted enough to submerge the entire United States in half a meter of water over the past 20 years, according to data released by Danish researchers this week. According to NASA, the climate in the Arctic is warming faster than anywhere else on Earth, and the melting of ice in Greenland is now a major factor in raising the surface of Earth’s oceans.

Polar Portal said the Greenland ice sheet has been shrinking by about 6,500 cubic kilometers since sea levels were measured in 2006. Several Danish Arctic Research Institutes are also affiliated with this portal. According to the Arctic Monitoring website, the amount of water produced by melting ice is enough to submerge the entire United States in half a meter of water, and cause a 1.5 cm rise in sea level.

The Polar Portal has also discovered that it is based on satellite images taken by the US-German GRACE program (Gravity Recovery and Climate Experiment). Which suggests that the melting of ice at the edge of the ice sheet near the coast of the Arctic region is a very serious matter. In this peripheral region, independent observations also indicate that the ice is thinning. The website said glacier fronts and on land are retreating and melting large amounts of ice from the surface.

The data suggest that the west coast of Greenland is influenced by the massif. The climate crisis in the Arctic is particularly worrying. Scientists say that the temperature is rising three to four times the global average.