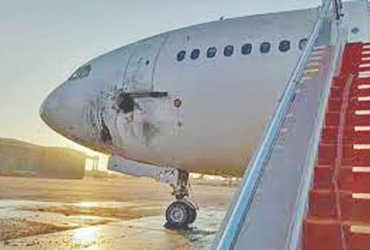 Rockets were fired early in the morning. The bomber struck in front of an Iraqi Airways plane shortly after noon. The army said the launch pad was near Abu Dhabi.

There are also US and allied advisers at the airport, which have Iraqi military bases. Two security officials, speaking on condition of anonymity, said the rocket hit near civilian and military areas of the airport.

The airline said the attack damaged an out-of-service aircraft parked at the airport. But despite the attacks, the rest of the operation continues as usual and there has been no delay.

The attack is one of a series of attacks on the US-led Iraqi presence that began last year. It also marks the second anniversary of the US assassination of Iranian general Qassem Soleimani and Iraqi terrorist commander Abu Mahdi al-Muhandis. A pro-Iranian Shia group in Iraq has vowed to avenge the killing of Soleimani. They argue that US forces will withdraw from Iraq only after a complete withdrawal.

US-led coalition forces last month ended a conflict with the support of Iraqi forces in a mission against Islamic State. 2,500 troops will be present to support the Iraqi army as an advisory body.