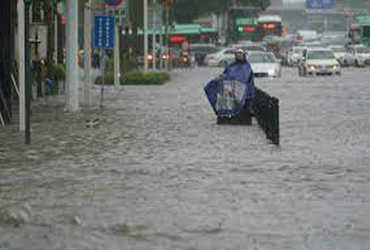 The recent devastating floods in Zhengzhou, Henan province of China have displaced millions, but due to good technology and management, more than 500 people have died so far, although not only in China, but in any part of the world. Government figures are questionable. So far, six of the top ten devastating floods in the world have affected China. This gives an idea of ​​how much damage he must have done. In a way, the floods in China have so far killed more than one million people.

The 1931 flood in China is considered the most devastating flood in human history. After two years of drought, Ritsar was hit by a storm. It had rained heavily and the storm level was very high. By July 1931, three of China’s major rivers, the Yangtze, the Yellow River, and the Huawei, were flowing above their maximum limits. One million to four million people are said to have died in the floods and subsequent epidemics. This flood made the Chinese government understand the importance of an effective disaster management system. The country then established an effective disaster management system to deal with natural disasters.

The Yellow River flood of September 28, 1887, is also considered disastrous. It is said that nine lakh to 20 lakh people were killed in the floods. In addition, more than two million people have become homeless. Agriculture was completely destroyed in many small villages and towns. This gave the Yellow River the nickname China Soro.

In 1938, the Yellow River floods in China is said to have killed eight million people. In fact, the nationalist government of China brought this flood artificially. The Japanese army was advancing during the Sino-Japanese War. The Chinese government wanted to stop them. For this he broke the banks of the Yellow River and allowed the water to flow freely in different provinces. Unfortunately, the Japanese army found a way out of the flood, but the victims were Chinese citizens. The Chinese government did not accept responsibility for such floods until 1945, when Japan was defeated.

The Baniyao Dam on the Ru River failed due to Typhoon Nina. The floods initially claimed 86,000 lives. While the remaining 145,000 people died of starvation and epidemics. Typhoon Nina rained throughout the year in 24 hours. Meteorologists failed to predict it. The Bankiao dam also failed and the smaller dams nearby also failed.

In China, the 1935 Yangtze River flood killed more than 1.5 million people and left millions homeless. The epidemic gave rise to tuberculosis, malaria and skin diseases throughout the river valley. The Yangtze River is usually prone to seasonal flooding, but it is not as dangerous.

The flood was named after St. Felix. It wiped out dozens of villages and some towns. About 150,000 people are said to have died. At that time there was property damage of more than 100 million euros. The flood was named Evil Saturday in Dutch history, because it occurred on Saturday, November 5, 1,530. It is considered the most devastating flood in European history.

When the floods occurred in 1971, it was not given much importance, as the Vietnam War was going on at that time. But the flood took the lives of more than one lakh people. People from the mainly Vietnamese city of Hanoi were killed. It took several years for Vienna to recover from the disaster. The reason was that both the government and the people were barely recovering from the war.

The Yangtze is the third longest river on Earth. It flows across the country. It is a 3,917-mile long river. It is the main source of transportation and irrigation in China. The Jiangsu-Anhui flood occurred in 1911 when the Yangtze simultaneously flooded the Huai River. More than one lakh people lost their lives and more than four lakh people were displaced and property was also damaged on a large scale.

The flood of St. Lucia occurred on December 12, 1287. Between 50,000 and 80,000 people were killed in the northern Netherlands and Germany. Before the flood there was no water in the lakes of the Netherlands. The flood destroyed many villages. These include the village of Amsterdam. Amsterdam became a village town after the flood waters receded. Today we know it as the city of Amsterdam.

Holland is the most affected region in Europe. The country is mainly located on the banks of the Rhine, Shields and Meuse rivers. The Northern Sea floods began in June 1212 and ended six months later. It is said that 60,000 people died in it. Thousands fled to their homes. This caused huge loss of life and property. It took several years for Holland to recover from the floods of the North Sea.