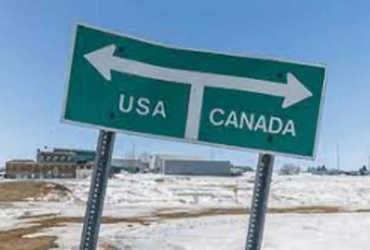 Seven Gujarati nationals who had infiltrated into the US from Canada will be released and deported to India. The US Customs and Border Protection Department said in a statement that the process of deporting seven Indians who attempted to infiltrate has begun. US citizen Steve Shend, who infiltrated these Gujaratis, will be prosecuted for human trafficking.
US Customs and Border Protection officials said in a statement that seven Gujarati nationals who entered the US from across the Canadian border would be released and repatriated. The process for this has been started. Five Gujarati nationals told officials that they had infiltrated the US from across the Canadian border in the hope that someone would take them. Two Gujarati nationals were caught while American national Steve Shane was driving in his truck. All seven Gujarati nationals will be released. However, a case of human trafficking will be filed against Steve Shand. He could face up to life in prison.
US officials say that Steve extorted money from these Indian nationals in exchange for smuggling them from Canada to the United States. Other defendants are likely to join Steve as well. Gujarati citizens crossed the Canadian border and walked for 11 hours hoping to enter the United States. All these civilians tried to infiltrate as part of the same group. A four-member Gujarati family crushed in the cold was also in this faction, but later parted ways. The temperature in the area from where these Gujarati nationals had infiltrated was reaching minus and during these months very cold winds are blowing there. Officials called it a tragedy. The area where the Gujarati family died is considered extremely difficult. It has been kept in the category of extreme weather. All the citizens walked for hours to reach the border in harsh weather.
US Customs and Border Protection officials said six of the seven Indians would be released under the Immigration and Nationality Act. An Indian citizen will be released on humanitarian grounds. According to officials, all the seven Gujarati nationals arrested can only speak Gujarati fluently. Apart from this, his knowledge of the English language was just a name. Many of them could not speak English at all.