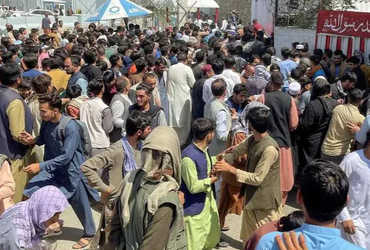 Fearing Taliban rule, Afghans, along with foreigners, are fleeing the country to save their lives. In a similar situation, seven people were killed in a Taliban attack trying to enter Kabul airport on Sunday. The Taliban, who dream of regaining power in Afghanistan after two decades, are describing themselves as more moderate this time, but their real face is now coming to the fore. The Taliban, on the other hand, has accelerated the cycle of establishing their rule.

The British Defense Ministry said in a statement on Sunday that thousands of Afghans were arriving at Kabul airport as countries including the United States, Britain and India launched a campaign to evacuate their citizens as well as Afghan refugees from Afghanistan. . As the crowd gathered near Kabul International Airport, the Taliban opened fire, causing the people to flee. Seven people were killed and several others were injured in the stampede.

The British military said the deaths were caused by Taliban gunfire and it was not clear whether they had fled. The situation in Afghanistan is very challenging, but we are trying to get people out of Afghanistan as safely as possible.

An estimated 50 people have been killed around Kabul airport in the past week, fearing the Taliban may flee Afghanistan, the NATO diplomat said. The Taliban, on the other hand, have started exercising their rule in Afghanistan. Taliban commanders have scheduled meetings with former governors and officials in 20 of Afghanistan’s nine provinces in the coming days.

“We are not forcing any previous government official to join us or prove our allegiance to us,” a Taliban commander said on condition of anonymity. It is up to him to decide whether to join the government or not. They can do so if they want to leave the country. We only want complete clarity on the planned withdrawal of foreign forces from Afghanistan.

However, the view outside Kabul Airport tells something else. Thousands of Afghans are trying to flee the country for fear of the Taliban, who are holding them back. Hundreds of people fleeing Afghanistan are talking differently about the brutality of the Taliban.

Afghan citizens, especially women, who have witnessed the brutal Taliban rule two decades ago, continue to fear the Taliban. At the same time, those who have helped American and NATO forces against the Taliban in the past two decades also fear that the Taliban will retaliate against them. As a result, a week after the Taliban took control of Kabul last Sunday, huge crowds are gathering at Kabul airport to leave the country, creating chaos.