Russian tanks roar on the border, Ukrainian drone tests, 50,000 people will die if war breaks out 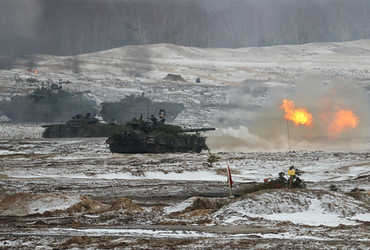 The Russian army, which surrounds Ukraine from three sides, has started joint exercises with Belarus.

30,000 soldiers, tanks and artillery are showcasing their might in the 10-day exercise. On the other hand, the Ukrainian army has also started a 10-day war game. Along with anti-tank missiles training is also being imparted in bunker launching – to destroy missiles supplied to the UK.

This is the first time since World War II that such a deployment has taken place. If Russia and Ukraine go to war, it will be the bloodiest post-World War II war.

Britain and France are trying to persuade Russia. On the other hand, the US presidential office, the White House, has warned that 50,000 people could die if a war breaks out between Russia and Ukraine.

Russia will attack Ukraine on all fronts, whether in a limited area or by sea, is a matter of speculation.

Meanwhile, Turkey has promised to help Ukraine. Turkey has provided Ukraine with its dangerous drones, which played a key role in the Armenian-Azerbaijani War and wreaked havoc in Armenia.