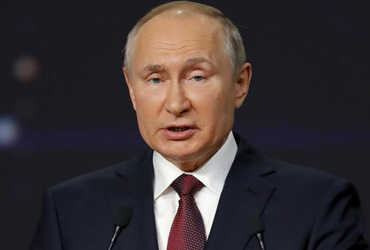 Moscow: Russian President Vladimir Putin has threatened direct war with the US and Britain. Putin has said that the Russian army is ready for war. Putin said in a warning tone that Russia’s navy was fully prepared to attack enemy positions.

The special thing is that Putin made this statement in the middle of Russia’s conflict with America and Britain. In 2014, Russia forcibly annexed Crimea from Ukraine. However, most countries still consider Crimea to be part of Ukraine.

Russia tested its most advanced air defense system, the S-500 and the Zircon hypersonic missile, amid tensions with the United States and Britain. Russian President Vladimir Putin has threatened the US and Britain directly on the occasion of Russian Navy Day. He said that the Russian Navy is also ready to go to war if needed.

Enemy lines are on our target and we are ready to attack if needed. At the same time, Putin called Russia’s weapons undefeated, claiming that they are weapons that cannot be defeated by the United States or any other country. Putin also claimed that the United States was escalating the conflict.

In a video, Pope Francis supports vaccination against Covid-19: “an act of love”

your website will need to be used to create custom cards