Russia offers support to Venezuela to strengthen its sovereignty 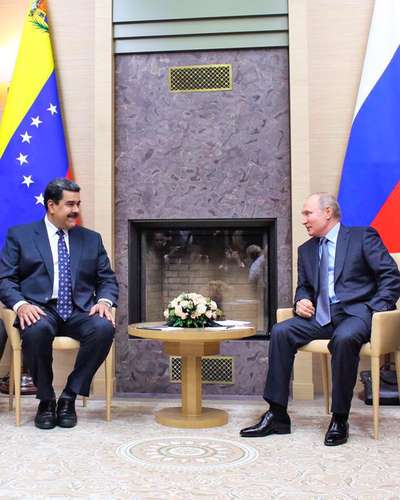 ▲ In a file image, the presidents of Venezuela, Nicolás Maduro, and of Russia, Vladimir Putin. Photo taken from the Twitter account of the Venezuelan president

Caracas. Russian President Vladimir Putin yesterday expressed his support for strengthening national sovereignty to his Venezuelan counterpart, Nicolás Maduro, during a telephone conversation in which they discussed economic, health and military issues, authorities from both countries reported.

The call came a week after Russia’s top negotiator in the Ukraine dialogue with the United States, Deputy Foreign Minister Sergei Ryabkov, said he could neither confirm nor rule out the possibility of Russia sending military resources to Cuba and Venezuela in the event that the United States and its allies do not restrict their military activities near Russia.

US National Security Adviser Jake Sullivan then downplayed the comments as bragging.

Asked Monday about the possibility of a Russian military deployment in Cuba and Venezuela, Kremlin spokesman Dmitri Peskov told reporters that Russia is thinking about how to guarantee its security in the context of the current situation.

In a statement, Maduro’s office said yesterday that Putin expressed all his support in defending the sovereignty and in pursuit of the development of Venezuela.

The Russian president expressed his support for the efforts of the Venezuelan authorities to strengthen national sovereignty, the Russian Foreign Ministry added on Twitter.

In turn, Maduro expressed to Putin his solidarity with Russia and his repudiation of the provocation and manipulation campaigns against him.

The Venezuelan president has not referred to the issue of a possible Russian military deployment in his country, and the day before yesterday he indicated that anyone who believed the statements of a former intelligence chief who fled to the United States in 2019 was wrong.

Retired general and former intelligence police chief Manuel Cristopher Figuera said last Monday that there would be Russian bases inside Venezuelan military installations, and stressed that one of them would be inside a brigade in Valencia and another in Manzanares, both close to Venezuela. Caracas.

Reporting on the conversation, Maduro tweeted: I had an important telephone conversation with brother President Vladimir Putin. We discussed issues related to existing cooperation in various strategic areas at the highest level, a relationship that is strengthened by the unbreakable union of our peoples.

He added that they discussed the increase in trade between the two countries, as well as the launch of air connectivity between the cities of Caracas and Moscow.

Maduro thanked the Russian government for its support in the fight against the covid-19 pandemic through the supply of vaccines and medicines to guarantee the health of the Venezuelan population.

In this regard, the Russian Foreign Ministry also reported that the presidents highlighted the importance of continuing cooperation in the fight against covid-19, including Russian vaccine supplies to Venezuela.

In December 2018, Russia briefly sent a pair of its nuclear-capable Tu-160 bombers to Venezuela, in a show of support for Maduro amid pressure from the West.

Russia is an important political ally of Venezuela, which is increasingly isolated by economic sanctions imposed by the United States and the European Union, which accuse Maduro of undermining democratic institutions, while grappling with a severe economic crisis.

The United States does not consider Maduro’s 2018 presidential election valid and instead recognizes Venezuelan opposition leader Juan Guaidó as the legitimate president of the South American country.

At night, Maduro reiterated that the extremist right from Colombia and Washington intends to resume the campaign against Venezuela. Alert. Let’s not allow it, he asked during an official act.