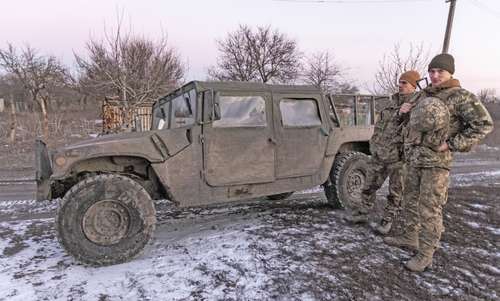 ▲ Ukrainian soldiers patrol yesterday at the separation line of the pro-Russian rebels, in Mariupol, Donetsk region. US Secretary of State Antony Blinken has warned of a swift and harsh response from the US and its allies if Russia invades Ukraine.

Moscow. Russia announced yesterday that it will hold large-scale naval exercises this month, saying the West is plotting provocations in Ukraine, where the Kremlin has been accused of planning military action.

Meanwhile, US President Joe Biden reiterated that any movement of Russian troops across the border with Ukraine would be considered an invasion and that Moscow would pay a very high price for this action.

From Berlin, US Secretary of State Antony Bliken asserted that any Russian violation of Ukraine’s sovereignty would return us to a dangerous and unstable time, when this continent was split in two with the threat of all-out war looming over our heads. .

In the context of the concentration of some 100,000 Russian soldiers near the border with Ukraine and massive joint war drills with Belarus, the Russian Ministry of Defense commented that maneuvers will also be carried out in which the bulk of the Russian naval potential will participate.

The drills are intended to practice the action of the Navy and the air force to protect Russian national interests in the world’s oceans and to counter military threats to the Russian Federation, the Defense Ministry said, adding that the exercises will begin this month and will last until February.

The agency said several Russian warships are taking part this week in joint exercises with China and Iran in the Gulf of Oman.

Biden ratified yesterday his conviction that Russia will invade Ukraine and warned his Russian counterpart, Vladimir Putin, that his country will pay a high price in human lives and in the isolation of the international banking system if he does so.

Moscow has repeatedly denied that it plans to launch an offensive, but has tried to obtain a series of security guarantees from the West so that the North Atlantic Treaty Organization (NATO) does not incorporate Ukraine and other former Soviet nations, and stop its eastward expansion.

Biden’s threats against Russia do not contribute to detente in Europe, said Kremlin spokesman Dmitri Peskov, who indicated that the president’s speech may incite the Ukrainians to start a new civil war in their country and try to resolve it by force. the conflict in Donbas. This worries us, Peskov said.

Donbas, in eastern Ukraine, is controlled by Russian-backed separatists who have been fighting Ukrainian forces for nearly eight years in a conflict that has claimed more than 14,000 lives.

Washington and its allies rejected Moscow’s demands in security talks last week, but kept the door open for possible further talks on arms control and confidence-building measures to reduce the potential for hostilities.

Blinken visited Ukraine to reaffirm Western support and will meet in Geneva on Friday with Russian Foreign Minister Sergei Lavrov. Yesterday, Blinken held talks in the German capital with his European allies.

If Russian military forces cross the Ukrainian border and commit further acts of aggression, there will be a swift, severe and united response from the United States and our allies, Blinken warned.

His French counterpart, Jean-Yves le Drian, present in Berlin, warned the Russians not to try to forge a Yalta 2, a new division of the spheres of influence between East and West, 77 years after the conference that designed the Europe of the post war

In London, Prime Minister Boris Johnson called a possible Russian invasion of Ukraine a disaster for the whole world.

Russian Foreign Ministry spokeswoman Maria Zakharova has argued that claims by Kiev and the West of an imminent Moscow attack on Ukraine are a cover for large-scale provocations, including military ones that can have tragic security consequences. regional and global.

The United States yesterday imposed sanctions on four Ukrainians, including two deputies, whom it accuses of working with the Russian secret services (FSB) and of destabilizing activities in Ukraine.

Ukrainian deputies Taras Kozak and Oleg Voloshin are accused of having been instructed by the Russian federal security service FSB to recruit former senior officials and others in office to prepare with the aim of taking control of the government and controlling the country’s infrastructure with a Russian occupation force, the US Treasury said in a statement.