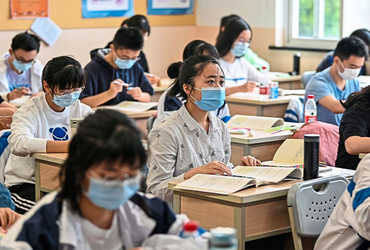 The number of corona cases in New Zealand increased to 21. Hui

Washington: Democrats and Republicans have clashed over the issue of wearing masks to protect children from corona infection. Democrat President Joe Biden has asked the education minister to examine options for filing legal action against Republican governors who oppose wearing masks and other measures to control the coronavirus.

In response, the Department of Education indicated the possibility of using the civil rights wing to counter the no-mask policy of Florida, Texas, Iowa and other Republican states. Wearing a mask is not mandatory in public schools in these Republican states.

President Bide asked Education Minister Miguel Cardona to analyze all available means that can be used against states that fail to protect students from corona. Biden said in his order that some state governments have adopted policies and laws that interfere with schools’ efforts to keep students safe when they come to class.

Some states have even tried to prevent school authorities from taking such safety measures. The federal government has similarly reprimanded schools for turning masks into a political battlefield. The Department of Education said on its website that policies banning wearing masks tantamount to discrimination.

If students are not able to go to school due to insecurity due to corona infection, then the agency can start investigation. In this case, students’ parents and the public will also respond when they complain about civil rights.

On the other hand, the leaders of 150 governments are due to address the United Nations General Assembly in New York next month. If leaders of 150 countries come to New York to take part in this event, it is likely to be a corona superspreader event. In the note issued by the US, it has been urged to organize all important events in virtual format.

On the other hand, the number of corona cases in New Zealand has increased to 21, which has increased the concern in the government. There are reports that New Zealand is now considering giving the corona vaccine to teenagers between the ages of twelve and fifteen. Prime Minister Jacinda Arden said that the mystery of how Corona’s case happened has been solved.

On 7 August, a person from Sydney developed symptoms of corona two days later. And a week later he was admitted to the hospital. The virus has not spread from the community. Now strict measures will be taken in the areas where the person has gone to contain and destroy the virus. At present 1000 contacts of positive cases are being screened.

The Philippine government has allocated 45.3 billion rupees (889 million) in its 2022 budget to provide a booster dose of the corona vaccine to citizens to fight the corona epidemic. A decision on whether to give a booster dose in the US is also expected next month.