Reportedly, workers were exploited to build Swaminarayan temples in five US states 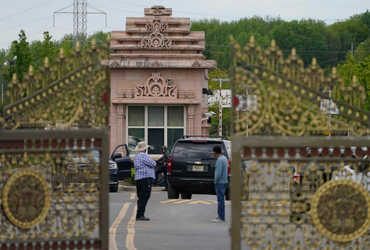 In America, the Akshar Purushottam organization of Bochasan has been accused of making workers work on low wages.

Activists have sued the organization alleging that they were hired to build a temple in New Jersey and were being paid 1.20.

The Bochasan-based Akshar Purushottam organization was first prosecuted in May, and is now being tried in four different states. , he was forced to sign contracts and work 12 hours a day.

The lawsuit alleges that the workers were brought to New Jersey on R-1 visas, usually for religious purposes, such as priests.

Workers from four other states were also implicated in the case last month, alleging they were also exploited at temples in California, Chicago, Texas and Atlanta.

Meanwhile, Bochasan resident Akshar Purushottam has dismissed all allegations as baseless, with the organisation’s lawyer claiming that the US government has been issuing R-1 visas to stone carvers for the past 20 years.

However, workers in other states say they were paid less than the minimum wage in New Jersey, but not as much as in other states. Some workers have worked for eight to nine years.

The workers also alleged that they were not allowed to keep their passports with them. They were put to sleep in a large hall under the supervision of security guards and told that they would suffer serious bodily harm if they quit their jobs.