Quad meeting: Emphasis given on increasing mutual cooperation against China in the Indo-Pacific region 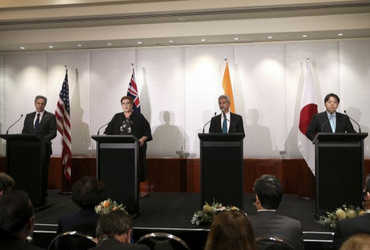 Melbourne, DT
The fourth meeting of the Quad Group of Foreign Ministers of India, the US, Japan and Australia focused on enhancing mutual cooperation for peace and security in the Indo-Pacific region. Foreign ministers of the four countries said that they are against coercive economic policies. At the same time, emphasis is being laid on international law, peace and security in the maritime domain. He said that this region underlines the development and prosperity of the Indo-Pacific region.
“Our meeting has taken forward the positive and ambitious agenda of the Quad,” the foreign ministers of Australia, India, Japan and the US said in a joint statement issued after the meeting of the foreign ministers of the Quad Group. We are focused on working with Indo-Pacific partners to address some of the region’s most pressing challenges. The Quad Group is more effective in providing practical support to the sector.
In the meeting, Antony Blinken of America, S. participated. Jaishankar, Australia’s Maris Payne and Japan’s Hayashi Yoshimasa participated. The Quad believes that international law, peace and security in the maritime domain are the basis for the development and prosperity of the Indo-Pacific. The Quad tries to do everything possible to help the neighboring countries.
Foreign ministers of the Quad countries have also called for strengthening capacity building to ensure cyber security and prevent cybercrime. He reiterated concerted efforts to assist partners in the Indo-Pacific to combat the growing threat of ransomware. During the meeting, the Quad countries also expressed their commitment to strengthen their political efforts so that all like-minded countries share a technology vision, guided by the Quad principles on technology design, development and governance. Australia hosted India, Japan and the United States for the 4th Quad Foreign Ministers’ Meeting in Melbourne on Friday. The meeting called for increased cooperation in areas including the economy, security, the coronavirus pandemic and a free and open Indo-Pacific region.
Meanwhile, US Secretary of State Anthony Blinken has indicated that the US is also keeping an eye on China amid the Ukraine dispute, adding that relations with ASEAN countries are equally important to him as with the Quad.