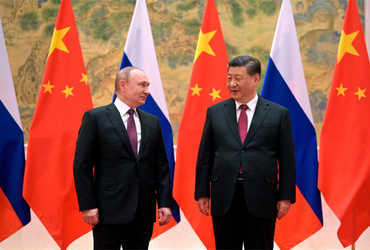 The visit of the two leaders will strike a balance between the US and its allies: Experts

BEIJING: Russian President Vladimir Putin arrived in China’s capital Beijing on Friday. He will be the guest of honor at the Winter Olympics in Beijing. It is also comfortable because the heads of any important country of the world will not be present as spectators in this Olympics. The role of heads of state or heads of government in the world is almost negligible. Incidentally, the presence of Russian President Putin at the opening ceremony of the Winter Olympics has been described by political experts as “extremely important” and clearly indicates that the friendship between Putin and Xi-Jing-Ping is growing. Which would be a retaliation for America and its allies. Naturally, this will only increase tensions in the West over Ukraine.

This is Putin’s first visit to China since 2014. The two countries will also devise strategies to balance their foreign policy and confront its allies in global organizations such as the United States and the United Nations.

It is well known that the United States, Britain and other Western countries have ordered their top officials or embassy officials not to attend the opening of the Games due to Beijing’s stance on human rights abuses and emancipation. India has asked its officials to stay away from the border dispute with China and the Olympic torch handed over to the Chinese military commander in Galwan Valley.

Since Putin himself will participate in the Olympics, heads of Central Asian countries will attend the inauguration as he has ties to both Russia and China. However, apart from Putin, UN Secretary-General, WHO Director Tedros A. Darren Tang of Gebreyesus and Doctor General of the World Intellectual Property Organization will also be present at the opening of the Beijing Winter-Olympic Games.