Putin and Xi stand against America on Ukraine question 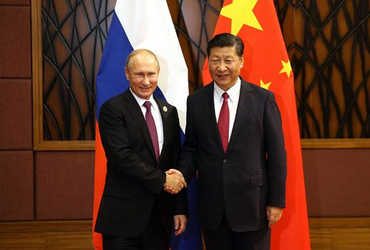 BEIJING: China and Russia have blamed NATO expansion for rising tensions over Ukraine. On the other hand, Putin strongly criticized Xi Jinping’s support for Xi Jinping in the Asia-Pacific region. Instinctively he did not give a clear name. But he was referring to quads made in the US, Japan, Australia and India.

Needless to say, Vladimir Putin and Xi Jinping met on the sidelines of the opening of the Winter Olympics in China and discussed global issues.

The Games were diplomatically boycotted by the United States and its allies. Yudhur cited atrocities by the Chinese government and human rights abuses against Muslims living in its west-north province, Jinggyan.

In short, Sino-Russian relations are always at a high level, with the President of Russia becoming the “star-leader” at the opening of the Olympics. However, the Games were attended by the presidents or heads of government of only four of the world’s 19 countries.

India has already clarified that it opposes the selection of Chinese military officer Qi-Fe-bao, who was injured in a clash between Indo-Chinese forces in the Galwan Valley, as the Olympic torch-bearer. Also, the border dispute between India and China has been going on for decades, so it is understandable that India would not be present at the opening of the Olympics.

A joint statement issued by the two sides after talks between Xi Jinping and Putin at the opening of the Games criticized the US’ unilateral approach to resolving global disputes.