Protests in Cuba continued for second day, despite crackdown 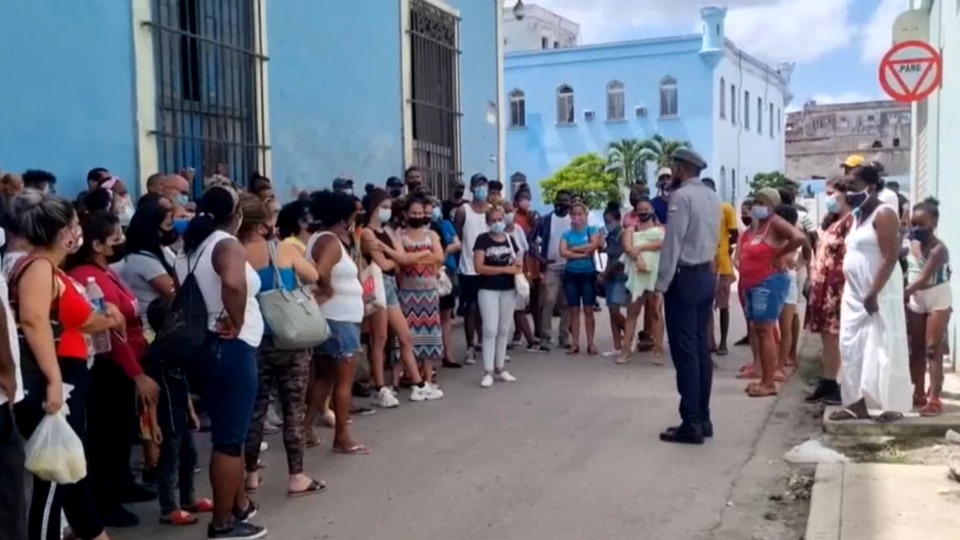 Mothers, fathers, brothers and spouses of detainees detained during Cuban anti-government protests went to the Havana police station on Monday to inquire about the fate of their families | Photo: Reproduction / ATAHUALPA AMERISE / Agência EFE / Gazeta do Povo

Cubans found themselves without the internet and saw the police presence increase drastically on Monday (12), the day after the massive demonstrations against the Castro dictatorship. This is how the Miguel Díaz-Canel regime has found to quell the protests: to sow fear in the population and cut off communications, which proved essential on Sunday for the protests to spread across the country. Internet access remains cut on Tuesday.

The information about the historic day which reached the majority of the population came from official sources, like the speech of Díaz-Canel, calling the demonstrators “delinquents”.

However, some Cubans have returned to the streets to protest. In Havana, a live Facebook broadcast on Monday afternoon showed dozens of people walking through some of the city’s streets.

The Diário de Cuba reported that Cubans reported protests elsewhere, but the information could not be independently confirmed by the media. The Nuevo Herald published a video of a protest in Holguín which, according to the newspaper, took place on Monday afternoon. In the footage, people are throwing stones at the local headquarters of the Communist Party of Cuba.

The possibility of the presence of plainclothes police in the streets of the island, however, raises fears of violence and arrests among Cubans who would otherwise protest against the regime. In addition, some of those who participated in the act on Sunday are in hiding so as not to be arrested, while others are seeking information on relatives who have been detained.

During the day, marches in favor of the dictatorship were also recorded.

According to Cubalex’s legal aid service, around 100 people were arrested on Sunday. There are numerous reports of journalists and independent artists detained and others being watched by police outside their homes.

The Inter-American Press Society (SIP) on Monday condemned the arrest and attacks on independent journalists. “We condemn the aggressions of the regime against the demonstrators and also against the journalists who covered the events”, in particular the call of the Cuban President Miguel Díaz-Canel for “the use of force, with the clear intention to restrict freedoms of association, press and expression, “said IAPA President Jorge Canahuati.

The IAPA also denounced the use of the state monopoly of Empresa de Telecomunicaciones de Cuba SA (ETECSA) to silence independent journalists.

The recent protests “reflect the fatigue of Cubans in the face of a government that continues to believe that it is the owner of the lives and fates of its citizens,” said Carlos Jornet, chairman of the Committee on Press and Freedom of the Press. information from the IAPA, in a press release. declaration.

EU calls for the release of opponents and journalists

The European Union (EU) on Tuesday called on the Cuban authorities to release “immediately” the citizens detained during the protests last Sunday, as well as the journalists, whose detention it deemed “unacceptable”.

“We are aware of reports not only of the arrests of opponents and activists, but also of journalists. This is absolutely unacceptable,” community spokesman Peter Stano said at the daily press conference in the European Commission.