president elect announces his cabinet; Allende’s granddaughter will be head of Defense

Chile: elected president announces his cabinet; Allende’s granddaughter will be head of Defense 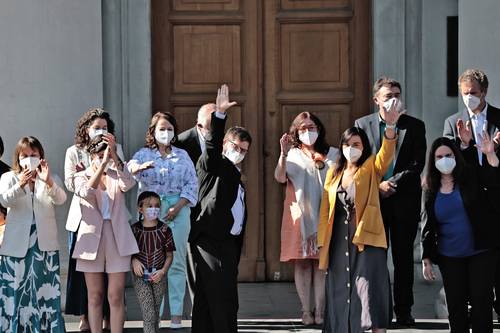 ▲ Chilean President-elect Gabriel Boric (center) presented his cabinet, made up of 24 ministers, and includes 14 women, as well as independent politicians and former student leaders. The new government will take office in 50 days. Photo n Xinhua/Agenciauno

Santiago. The president-elect of Chile, Gabriel Boric, yesterday named the former director of the Central Bank, Mario Marcel, future Minister of Finance, and the former president of the Medical Association, Izkia Siches, head of internal policy, presenting a cabinet made up in his majority by women and of political diversity.

With this team of 24 ministers, of which 14 are female, and a third without party affiliation, Boric seeks to expand the limits of his political coalition in order to achieve majorities in the next composition of Congress, divided between the forces of left and right. The Ministry of Defense was left in the hands of Maya Fernández, granddaughter of former President Salvador Allende, who was overthrown by the army in 1973.

We are accompanied in this team of ministers by people of diverse origins and formations; a diverse cabinet, a cabinet with a majority of women (…), with representation of regions, intergenerational, with political plurality, with diverse points of view and with a strong presence also of independents and militants of political parties, Boric explained in the ceremony that took place in the courtyards of the Natural History Museum of Santiago.

Marcel, an independent linked to the Socialist Party, 62, resigned from the Central Bank. Before, he held various positions in the center-left governments and was the favorite of the markets, who see in his appointment a gesture of moderation in the economic reforms that Boric seeks to implement.

Izkia Siches, future Minister of the Interior or head of the cabinet, is 35 years old, is a surgeon and in 2017 she became the first woman in the presidency of the Medical Association.

The political coalition that backed Boric, I Approve Dignity, which brings together the Broad Front and the Communist Party, has a representation equivalent to 24 percent in the Chamber of Deputies, so it needs to expand its support in the traditional center-left parties.

It is a political signal, of building a more robust correlation of forces, which allows the government to process projects in Congress, added Mella.

Among the officials of the incoming government are Giorgio Jackson and Camila Vallejo, former student leaders and deputies, who together with Boric led the 2011 protests to demand educational reforms. In Foreign Relations, he named Antonia Urrejola, a 53-year-old lawyer, president in 2021 of the Inter-American Commission on Human Rights, who announced that her management will be marked by more multilateralism, cooperation and dialogue.

The average age of the members of the new cabinet is 49 years. The youngest, at 32 years old, is Antonia Orellana, the next Minister for Women as of March 11, when the new government takes office.

The political committee was made up of Boric’s closest collaborators: the communist Vallejo, as minister spokesperson; Jackson, will be Minister of the General Secretariat of the Presidency; and Siches, the first woman to occupy the Ministry of the Interior.

Meanwhile, Marcel will face a slowing economy after growing close to 12 percent in 2021, driven by a strong increase in consumption after the social aid provided by the government of Sebastián Piñera and the withdrawals from the pension funds approved by Congress.

Marcel must implement the tax reform that Boric promised to collect up to 5 ppr percent of GDP, which he seeks to allocate to finance social projects.

As in his victory speech on the night of December 19, when he won the ultraconservative José Antonio Kast in the ballot by 55.8 percent, Boric promised to carry out social transformations gradually.

We are going to make all the changes that we have proposed step by step, because we are convinced that the majority of Chileans demand structural changes, said Boric, who defined the three axes of his future government: handling the pandemic, economic growth with social inclusion and ensure the success of the Constitutional Convention, which drafts the Magna Carta to replace the one inherited by the dictatorship of Augusto Pinochet (1973-1990) and which is expected to conclude its work in the middle of this year.