Presence of Taliban terrorists in PoK, Balochistan and Sindhi 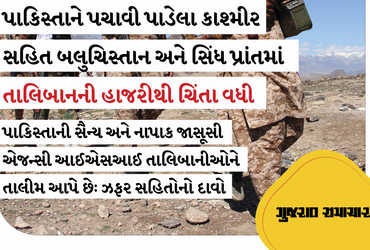 Washington, Ta. 20
Zafar Sahito, a Pakistani national fighting for the independence of Sindh, claimed that the presence of Taliban terrorists in PoK, Balochistan, Sindh would be a matter of concern for India. This Pakistani citizen living in America said that Pakistan. The army is training the Taliban.
He has been fighting for human rights in Sindh since 2013, including civil engineer Zafar, and running the Sindh independence movement in the United States. The human rights activist claimed that Taliban militants had a presence not only in Afghanistan but also on the Kashmir border. Apart from Pakistan-occupied Kashmir, Taliban terrorists are present in Balochistan and Sindh.
Zafar claimed that the terrorists were trained by the Pakistani army with the consent of the Pakistani government. Pakistan’s nefarious intelligence agency ISI is also preparing to spread terrorism by training these Taliban.
In an interview, Zafar Sahito said that if the Taliban terrorists are not stopped, they will become dangerous not only for Afghanistan but for the whole world including the countries of West Asia. Zafar even made the sensational allegation that Pakistan’s intelligence agency ISI had played an active role in the Taliban occupation of Afghanistan. The Taliban carried out the conspiracy with the help of ISI.
Zafar and others called on the world’s most powerful countries to end the Taliban insurgency. He said that the average citizen of Afghanistan has been harassed by the Taliban and soon the citizens of the country will come together and challenge the Taliban. Zafar said the involvement of Pakistani governments in training the Taliban would be countered if a proper investigation was conducted.