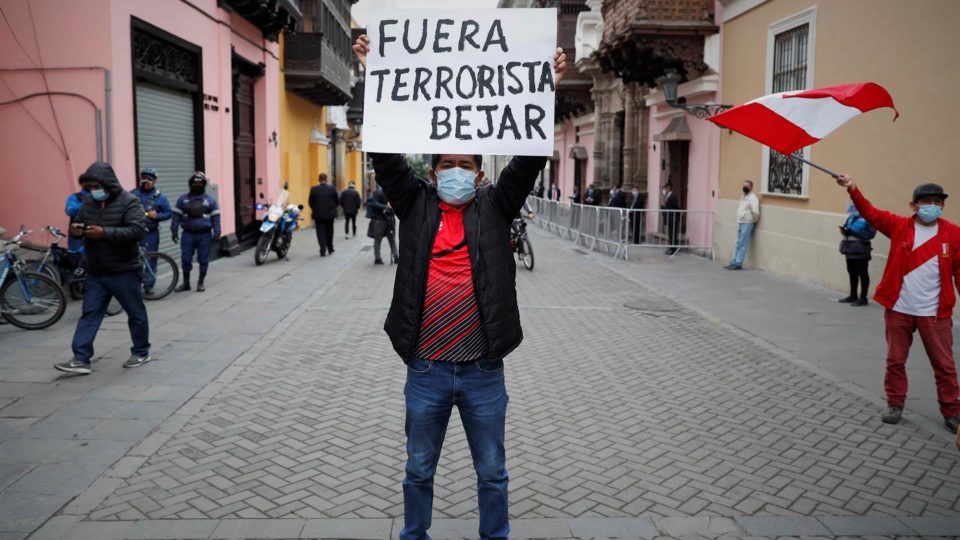 A group protests against the Peruvian chancellor Héctor Béjar, in front of the seat of the chancellery in Lima, Peru, on August 17th | Photo: EFE / Paolo Aguilar

The president of the Peruvian Council of Ministers, Guido Bellido, announced that there would be changes in the cabinet after the crisis generated in the country by the statements of the Minister of Foreign Affairs, Héctor Béjar, on the beginning of terrorism and the alleged Navy involvement.

Bellido announced via Twitter that changes would be made that he deems important to the country’s progress, confirming what various sectors are demanding from the government regarding the stay of Béjar, an 85-year-old ex-guerrilla.

Several Peruvian media reported that Béjar tendered his resignation to President Pedro Castillo on Tuesday, making him the prime minister to step down from the cabinet that took office on July 29. The departure takes place even before the team has received parliamentary approval, which is scheduled for the next 26th.

Last Sunday, statements from Béjar circulated in which he claimed that terrorism in Peru was initiated by the navy. It is not clear from the recording which terrorism the Foreign Minister was referring to, or the context of the speech, although several articles in the Peruvian press have suggested that he was referring to the Shining Path (SL). .

The final report of the Truth and Reconciliation Commission, which studied the period of the Peruvian internal war (1980-2000) between the state and groups such as the SL and the Revolutionary Movement Tupac Amaru (MRTA), clearly establishes that it was the Sendero who initiated the terrorist acts in the country.

The broadcast of the statements on a local television show was called manipulation by the Foreign Ministry and an affront to the Peruvian navy and the opposition, which anticipated a possible motion of censure against Béjar in parliament.

The Peruvian navy issued a statement on Monday condemning Béjar’s speech. “This is an absolutely false accusation, which constitutes an affront to the men and women who have fought and continue to fight terrorist crime,” defended the army.

However, for the Ministry of Foreign Affairs, the remarks made by the person in charge of the file were “manipulated, edited, cut and taken out of context in order to discredit and censor him”.

In the note released by the ministry, Béjar categorically denied intending to offend the armed forces and expressed his full willingness to work with all institutions on a foreign policy agenda for the benefit of Peu.

“Béjar will respond in detail and in the constitutional sphere to all interrogations, questionnaires and observations within the framework of the inquiry established by Congress,” the ministry promised, referring to a process presented to Parliament a week ago.

The foreign minister is one of those the opposition wants from the Castillo cabinet to give the government a vote of confidence. Lawmakers consider them to represent a radical left, close to Vladimir Cerrón, leader and founder of the Peru Free Party, political godfather of the president.