Peru declares environmental emergency due to oil spill in the sea 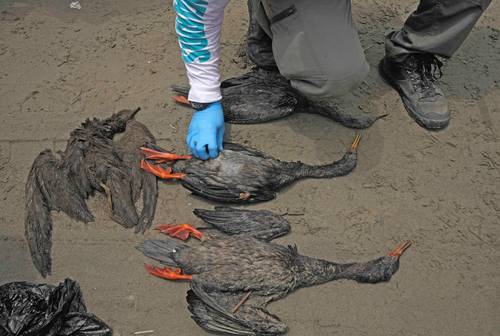 ▲ The oil slick in the Peruvian sea already covers 21 beaches and has caused unquantified losses of fauna.Photo Ap

Lime. Peru yesterday declared an environmental emergency for 90 days in the coastal area damaged by the spill of 6,000 barrels of crude oil a week ago amid waves attributed by the Spanish oil company Repsol to a volcanic eruption in Tonga.

With this measure, the government foresees a sustainable management of the affected territories, with the respective recovery and remediation work to mitigate contamination.

The Ministry of the Environment justified the emergency given that the spill constitutes a sudden event with a significant impact on the coastal marine ecosystem of high biological diversity, and a high risk to public health.”

The declaration indicates that the immediate and short-term action plan is in charge of the Spanish oil company Repsol, and the Peruvian government gave it a 10-day schedule to comply with all the cleaning and decontamination actions.

The spill occurred on Saturday, January 15, during the unloading process of the Mare Doricum, an Italian-flagged ship loaded with 965,000 barrels of crude oil.

Repsol claims not to be responsible for the incident, since the Peruvian maritime authorities did not issue warnings about a possible increase in waves due to the eruption.

The oil has already spread along the coast more than 40 kilometers from the refinery, causing the death of various marine species and affecting 21 beaches, according to the Ministry of Health, which recommended that people not go to them because they have unhealthy rating. Likewise, the Islotes Grupo de Pescadores area, which belongs to the National Reserve of the System of Islands, Islets and Puntas Guaneras, is affected in approximately 512 hectares, as well as the Ancón Reserved Zone in 1,758 hectares.

The Spanish company reported this Saturday that 2,384 cubic meters of compromised sand have already been removed in the cleaning operation in which more than 1,350 people participate, in contaminated marine and terrestrial areas, including 14 beaches.

The AFP found that on Cavero beach, in Ventanilla, brigades of workers from the Ambipar company, contracted by Repsol, clean up rocks impregnated with crude oil with cloths that absorb the hydrocarbon but not the water.

According to the oil company, 90 pieces of machinery have been used, including 46 heavy vehicles on land and 13 larger vessels, as well as “seven skimmers (marine cleaning machines), six floating tanks, three recovery tanks and more than 2 thousand 500 meters of containment barriers”, hoping to double the number of fences.

During the week there were several protests by fishermen and residents of Ventanilla.