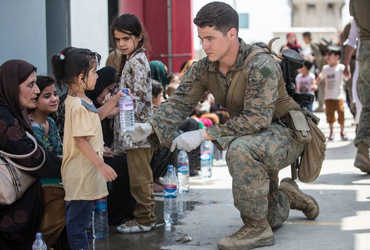 Due to such high prices of food and drink, people are forced to stand in the sun hungry and thirsty and are falling unconscious. On the other hand, the Taliban are beating them instead of helping them.

There has been an atmosphere of panic for more than a week due to the entry of Taliban in Kabul, the capital of Afghanistan. The whole world is aware of this reality of Taliban. But history will never forgive the Taliban for the torture the people of Afghanistan are facing at Kabul airport. There is gloom and gloom all around Kabul airport and there is no ray of hope on anyone’s face.

People are waiting for their turn in the heat of hunger and thirst. However now those people are losing patience and the body has started reacting. As a result, it is unknown at this time what he will do after leaving office.

The answer to these questions is water. The price of which is touching the sky in Kabul. Outside Kabul airport, a bottle of water is being sold for 40-40 rupees or about 3,000 rupees. Whereas the price of a plate of risotto has reached 100 100 which can be considered as Rs 7,500. The important thing is to buy a bottle of water or a plate of food which is being priced in dollars instead of Afghan currency.

Such high prices of food and drink have forced people to stand in the sun hungry and thirsty and faint. On the other hand, the Taliban are beating them instead of helping them. At present, NATO troops are emerging as aides in Afghanistan. They are providing food and water to the people living in temporary houses at the airport. In addition, US soldiers have been seen handing out packets of chips to young children in Afghanistan.

Afghan children are enjoying the treatment of foreigners and are also saluting American soldiers. However, it is also a fact that the status of Afghanistan is due to the United States of America. It has not been able to build an army in 20 years that can take on the Taliban. This behavior of his soldiers is giving a different identity to his image when America is handing over Afghanistan to the Taliban.