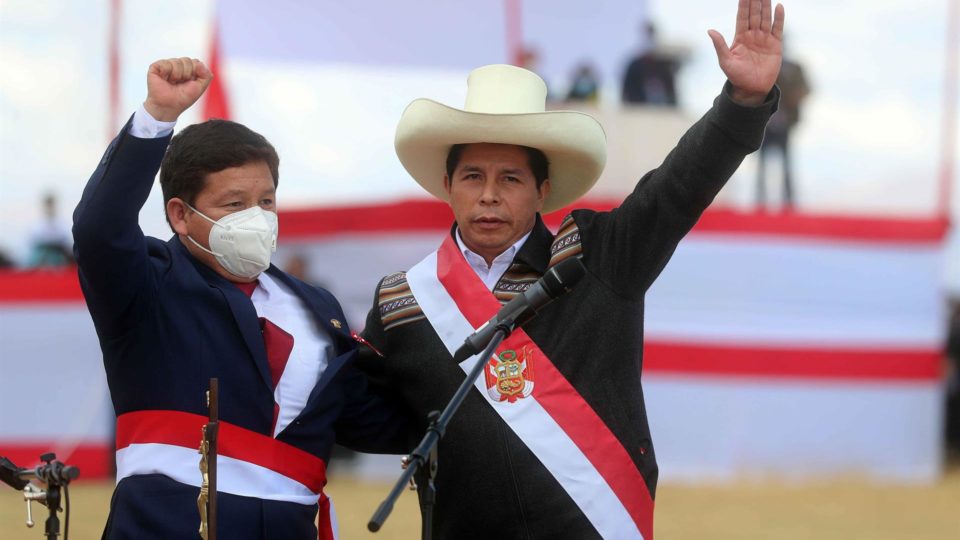 Pedro Castillo, the new President of Peru, celebrates with Guido Bellido his appointment as Prime Minister of his government on July 29 | Photo: EFE / Presidencia Peru

Pedro Castillo, the new president of Peru, appointed part of his cabinet on Thursday (29). Castillo appointed Guido Bellido, engineer and novice in politics, as prime minister. The new head of Peruvian diplomacy will be Héctor Béjar, an 85-year-old sociologist who in the 1960s was one of the founders of the communist guerrilla group Army of National Liberation (ELN).

Bellido is a member of the Peru Livre Marxist party, the same as the current president, and was not well known in political circles in the capital, Lima. He is one of the 37 party deputies elected in the last elections and is considered close to the founder of Free Peru, Vladimir Cerrón, who was barred from running in the presidential elections because he was convicted of corruption.

The appointments of the Castillo cabinet, which has not yet announced who will be the Minister of the Economy or the Minister of Justice, generated negative reactions and uncertainty in Peru. After the announcements, the Lima stock market fell 6% on Friday and the dollar exceeded the value of 4 new Peruvian suns for the first time in history. One of those listed for the Economics portfolio is the moderate Pedro Francke.

The non-governmental organization Associação Civil Transparência asked Pedro Castillo this Friday (30) to back down on the appointment of Guido Bellido as Prime Minister, because of “unacceptable” statements on the Shining Path, as well as “homophobic speeches and sexist “.

The organization, which functions as a political observatory and defense of democracy, today expressed in a statement its “deep concern” at the decision to appoint Bellido.

“This decision causes tensions and uncertainties at a time when a consensus is required to meet the urgent needs and conditions of the country to democratically discuss the government’s proposals,” the NGO said in the published note.

Bellido’s appointment, confirmed despite criticism, confirms that the Castillo government will be made up of a traditional and “archaic” left, as political analyst Sandro Venturo told Agência Efe.

The Associação Civil Transparência also regretted that the ministerial cabinet was made up of only two women, so it demanded that the elected president start to “adopt the necessary corrective measures”.

“Likewise, we call on the Congress of the Republic to act responsibly in the face of this situation. The two powers must ensure the well-being of the country and democratic governance, within the framework of the Constitution ”, then indicated.

Castillo’s new team are expected to ask for a vote of confidence in Congress in the coming days, where the center-right opposition is in the majority.

“Our office belongs to the people and responds to the people,” Castillo said on Twitter. “Our commitment is with Peru and of no other interest than to devote all our efforts to building a more just, free and worthy country. We will not disappoint your confidence.”

Peru’s new Minister of Foreign Affairs, Héctor Béjar, is a lawyer and doctor in sociology. In 1962, he founded the National Liberation Army, a guerrilla group which, like its namesake in Colombia, was inspired by the Cuban revolution. The group was defeated by the Peruvian armed forces a few years later.

Béjar was arrested in 1966 and spent five years in prison, before receiving a pardon from the government of General Juan Velasco Alvarado.

Since the announcement of Bellido’s choice, many groups have challenged the choice of the prime minister, including left-wing and liberal parliamentary benches, who have stressed that the appointment will neither bring confidence nor consensus to Peru.

The Morado Party, of which former President Francisco Sagasti is one of its representatives, even demanded that Congress not approve the new cabinet, believing that the Prime Minister “is a person who does not believe in democracy, human rights and the fight against corruption and terrorism. “.

Bellido, a 41-year-old electronics engineer, is close to Vladimir Cerrón, founder of Free Peru, who is serving a four-year sentence, currently suspended, for corruption offenses, covering his tenure as governor of Junin.

In addition, the new prime minister faces a preliminary investigation by the Peruvian public prosecutor’s office for alleged terrorism excuses, based on a video in which he was reluctant to label members of the Sendero Luminoso group as “terrorists”.