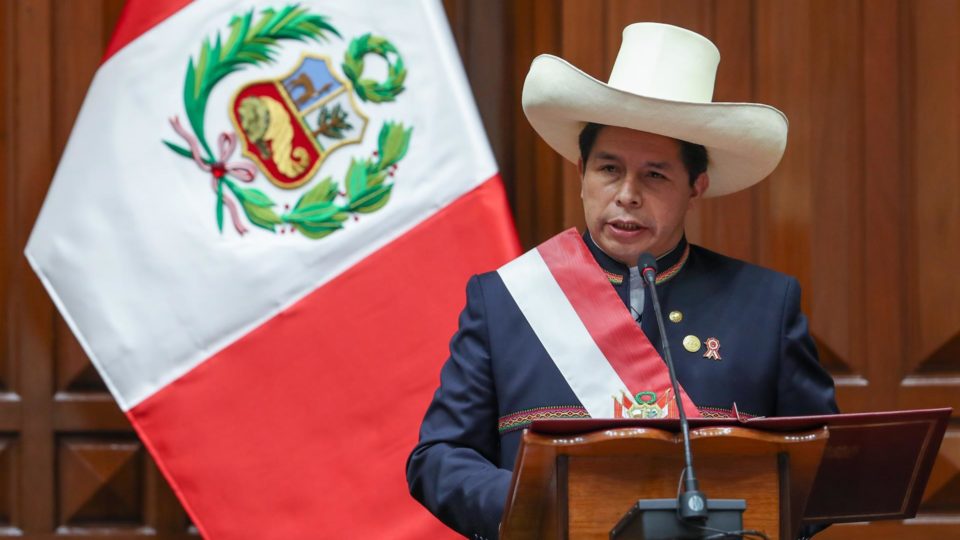 Pedro Castillo took office on Wednesday (28) as President of Peru for the period 2021-2026 after being sworn in before Congress and receiving the symbolic ribbon.

Dressed in his traditional wide-brimmed straw hat and a costume with native motifs, Castillo was sworn in to Congress President María del Carmen Alva.

“I swear by God, by my family, by my Peruvian brothers and sisters, peasants, natives, neighbors, fishermen, teachers, professionals, children, young people and women, that I will occupy the post of President of the Republic in the period 2021 -2016. I swear on the Peruvian people, on a country without corruption and on a new constitution, ”he said.

The simple ceremony brought together all the representatives of the powers of the State, as well as members of the president’s close family.

Also present were guests such as the King of Spain, Felipe VI, and the Presidents of Argentina, Alberto Fernández; Bolivia, Luis Arce; Chile, Sebastián Piñera; Colombia, Ivan Duque; and Ecuador, Guillermo Lasso. For Brazil, the representative was Vice-President Hamilton Mourão.

Castillo assumes the presidency at a critical time for Peru, which is feeling the effects of the Covid-19 pandemic and experiencing deep political polarization.

The 51-year-old rural teacher takes command of the country with the highest per capita mortality from Covid-19 and whose economy is struggling to recover after the retraction of 11.8% in 2020.

Castillo’s electoral victory surprised many Peruvians who believed in the victory of right-wing candidate Keiko Fujimori.

Peru, which is also celebrating its 200 years of independence, has for the first time in Castillo a head of state from the Andean countryside, who does not come from its political elites and its centers of power.

During the campaign, he insisted on the need for the state to intervene more in the economy and insisted on promoting the creation of a Constituent Assembly to create a new Magna Carta, proposals which have sparked controversy.

He reiterated this commitment in his inauguration speech, and added the need to work for greater security within the country, which suffers from “gangs and street robberies”.

Castillo also proposed that “foreign criminals have 72 hours to leave Peru and young people who neither study nor work will have to do their military service”.

After a hotly contested and divided election, the new president reiterated the need to unite the country: “It is time to rebuild the great national unity […] May the direction of progress and social justice be for all Peruvians! ”He concluded.

Castillo also takes office with the certainty that he will not have an easy relationship with his opponents, who since the night of June 6 – when he defeated right-wing candidate Keiko Fujimori in the second round – began to sow doubt about the legitimacy of his victory.

For weeks, Keiko denounced the existence of an alleged “fraud” at the ballot box committed by Castillo and his party, Free Peru, but without concrete evidence.

However, electoral specialists from the European Union (EU) were in the country and testified that the elections were “reliable and fair and in line with national and international commitments and obligations which govern democratic processes”.

Apart from this, the new president will have to face opposition from the National Congress, whose leadership will be exercised by the parliamentarian of the center María del Carmen Alva, strongly supported by the Keiko Fujimori party. No party holds a majority in the Legislative Assembly, posing a challenge for Castillo to push forward the reforms he intends to implement.