PCdoB says there is no violent crackdown in Cuba 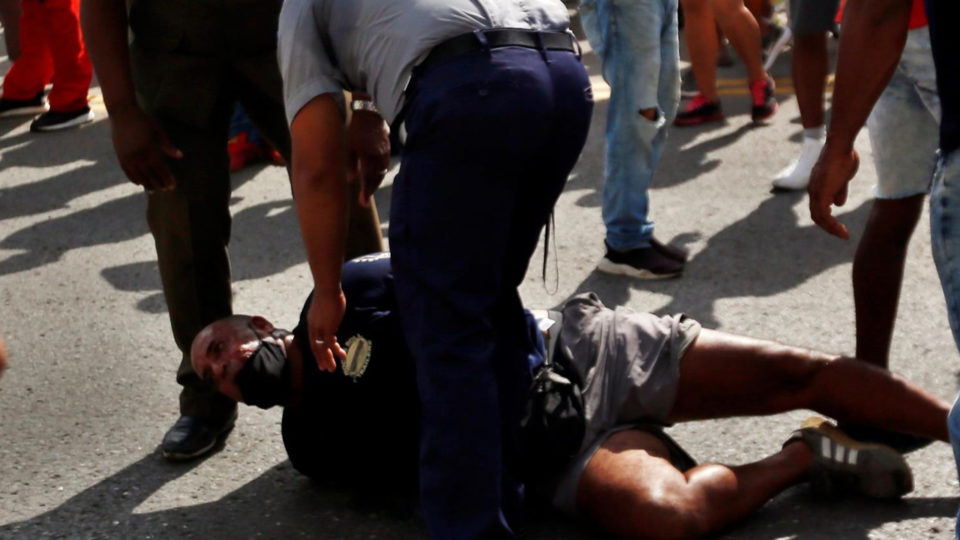 The Communist Party of Brazil (PCdoB) has made a series of posts on its social media about the recent protests in Cuba. Party messages contain false information and distortions regarding the situation, as verified by Gazeta do Povo.

“There are protests all over the world,” said the note, signed by Luciana Santos, national president of the PCdoB. “The media choose to praise some of them.”

The protests have drawn media attention as the acts seen in Cuba last Sunday, and to a lesser extent this week, are unprecedented on the island, both in scale and in the audacity of the citizens who descended on the island. the street to face the repression they are subjected to. in six decades of Castro dictatorship.

“In Cuba, we have not seen scenes of violent repression, as we often see in the United States and Brazil,” said the publication PCdoB.

However, cases of violent crackdown on protesters have been reported by citizens and independent journalists, and condemned by various organizations and governments.

The Cuban regime itself has admitted that a man was killed in a clash between protesters and security forces on Monday in a neighborhood on the outskirts of Havana, according to the Cuban public news agency. The 36-year-old was participating in protests against the dictatorship in Arroyo Naranjo municipality, when several people were arrested and others were injured, including police officers, the agency said.

The NGO Cubalex counted until Friday the detention of 383 people, of which 55 have already been released.

Freelance journalists working to cover the protests have also been the target of the crackdown. An Associated Press photographer was injured by police in Havana and a photo reporter from the same agency was assaulted by supporters of the regime.

Cuban freelance journalist Camila Acosta, who writes for ABC Spain newspaper, was arrested on Sunday after posting photos and information about the protests on social media. Acosta was released from police custody on Friday but was placed under house arrest.

Cuban YouTuber Dina Stars was also arrested by agents of the dictatorship while conducting a video interview with a Spanish newspaper about the protests at her home on Tuesday.

The NGO Human Rights Watch said on Friday it had conducted dozens of interviews with journalists, activists and victims in Cuba. The preliminary list of detainees reaches nearly 400 people, said José Miguel Vivanco, executive director for the Americas at HRW. “The fate of many of them is unknown,” he said.

“In many cases, the regime has arrested well-known activists and journalists with the apparent aim of preventing them from participating in or reporting on protests,” Vivanco said. “Several were arrested leaving their homes or walking in the street.”

To date, the NGO has documented the arbitrary arrest of seven journalists, three of whom have already been released or under house arrest. In other cases, security forces “arbitrarily detained people who took part in protests peacefully, as well as passers-by,” Vivanco reported, adding that officers had gone to look for protesters at their homes, “after being recognized by photos and videos “.

“In the vast majority of arbitrary detentions that we have documented, detainees remain incommunicado. They are not allowed to call their families or their lawyers, nor to receive visits, ”said the director of the NGO.

HRW has reported cases of family members not knowing the whereabouts of their loved ones and of mothers looking for their children at police stations. The situation is worsened by the ban on the free press in the country and the control of internet access in Cuba, which jeopardizes the coverage of the facts and the organization of the demonstrators. Most social networks and messaging apps remain blocked on Cuba’s mobile internet service days after the protests start.

“Without a combined and intelligent international pressure to force [o ditador Miguel] With Díaz-Canel putting an end to the abuses and censorship, it is likely that we will never fully know the repression that has taken place these days, “concludes Vivanco.

United Nations High Commissioner for Human Rights Michelle Bachelet on Friday urged the Cuban dictatorship to release those arbitrarily imprisoned “for exercising their right to freedom of peaceful assembly or to freedom of opinion and ‘expression”.

why the protests are happening

“The most important thing is: why are the protests happening? Mainly because of the problems arising from the economic blockade promoted by the United States 60 years ago, ”the PCdoB statement continued.

In reality, Cubans have taken to the streets motivated by severe shortages of food, medicine and electricity, and calling for “freedom” – not against the US economic embargo. Protesters in the streets chanted anti-Díaz-Canel slogans such as “Down with the dictatorship” and called for vaccines against Covid-19 and an end to the high prices of basic necessities.

Cuba was already suffering from a serious economic crisis since 2019, also influenced by the drop in oil production in Venezuela and the end of the “more medical program” in several countries. With the pandemic, the border closures have drastically affected the tourism sector on the island, one of the country’s main sources of foreign exchange.

One of the symbols of the current protests and general discontent is the song “Patria y Vida”, the title of which is a play on words with the slogan of the communist regime “Patria or death”.

The song that has become a popular phenomenon was composed in collaboration between Cuban hip hop artists living in Miami (USA) and rappers living in Cuba. His words accuse the dictatorship of destroying the quality of life in Cuba. “No more lies. My people demand freedom. No more doctrines,” the song says.

Reference in health and education

“With education and health being benchmarks in the world, Cuba has produced its own vaccine. But the US embargo makes it difficult to buy supplies such as needles and syringes, for example,” the publication said. PCdoB.

It is a half-truth. In addition to the problem of unreliable data released by a dictatorship, there are health and education infrastructure issues on the island. Cuba in fact exports medical services through – controversial – programs like Mais Médicos in Brazil, and it also has a preventive health system model, which in theory is a good model, but in reality the structure of health for which Cuba has long lacked resources, as detailed by the American public health expert Steven Ullmann.

Although Cuba has developed a “medical tourism” industry which attracts foreigners seeking treatment from qualified doctors and which costs less than in their country of origin, the Cuban population does not have access to this same infrastructure.

Currently, a severe shortage of drugs has made the population more vulnerable than ever to diseases such as diabetes, arthritis and scabies. Medicines needed to treat these and other diseases have disappeared from the shelves and people who need them now rely on the solidarity of acquaintances who share medicines or resort to other methods such as smuggling – medicines are sold in online groups up to ten times more expensive than the original.