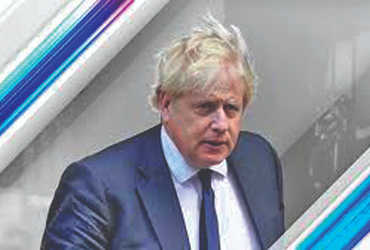 Half the party has turned against Boris Johnson at the party gate as the party’s reputation has been tarnished: leadership questions

London,
British Prime Minister Boris Johnson has resigned following a scandal involving the Fifth Party. The scandal has dealt another blow to Prime Minister Boris Johnson, who is trying to cement his weak position. According to the ruling Conservative Party website, Elena Narzonski, another adviser to the No. 10 Downing Street policy unit, became the second adviser to resign. Johnson’s aides have resigned. One half of the party is said to be opposed to Boris Johnson, who has damaged the party’s reputation in the Party Gate scandal. Questions are being raised on his leadership. Johnson’s longtime policy chief Munira Mirza, chief of staff Dan Rosenfield, principal private secretary Martin Reynolds and communications Jack Doyle have all resigned as of Thursday. The investigation revealed that not one but several parties were organized on Ten Downing Street, when the whole of Britain was facing the COVID-19 lockdown. Thus the rules of lockdown were openly violated by the Prime Minister himself.

Nikki da Costa, a former Downing Street aide, said, “I know Narzonski as a very principled woman.” Business and Energy Secretary Greg Hands said on Friday that Prime Minister Boris Johnson is going to reshuffle his Downing Street team after a dispute over lockdown parties. In response to what was happening in Downing Street, Haynes said the resignations had been accepted.

Hugh Merriman, a senior Tory member on the House of Commons Transportation Committee, said he was “deeply saddened” by the situation. He has asked Johnson to step down if the situation does not improve. The resignations of top aides have raised questions about Johnson’s leadership within the party. Doyle told employees that recent weeks have been “very dangerous” for my family life, but that I really wanted to quit after two years. A spokesman said Rosenfeld had offered to tender his resignation to the PM on Thursday, but he was asked to remain in office until further notice. The same thing has also been said to PM’s Chief Secretary Reynolds. But he will return to his role in the Foreign Office. Mirza resigned following the prime minister’s false claim that opposition Labor leader Sir Keir Starmer had failed to punish pedophiles while he was director of public prosecutions.