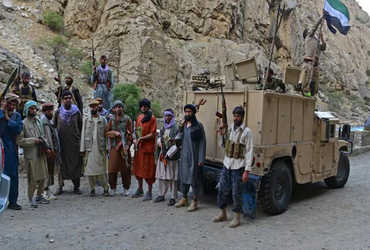 The fighters of the Northern Coalition are not ready to bow down to the Taliban which is taking power in Afghanistan.

Panjshir province, a stronghold of the Northern Alliance, is gearing up to fight the Taliban. The northern coalition claimed yesterday that 350 Taliban militants trying to capture Panjshir had been killed.

As per the details now received, massive preparations have been made by the Northern Alliance to fight the war. A stadium in Panjshir province has been flooded with ammunition. Northern Alliance also has two helicopters.

The Taliban have not yet captured this lone province and the Taliban are desperately trying to control it as well. Although the Taliban claim that we have surrounded Panjshir, in reality the Taliban attacks have not been as successful as they should have been. Thousands of anti-Taliban fighters have gathered in Panjshir to answer the Taliban.

However, the threat to Panjshir is that the Taliban have lethal American weapons and could use them to attack Panjshir.

Meanwhile, in a video that has gone viral on social media, it can be seen that a cache of ammunition has been kept at the Panjshir Stadium. Combat vehicles have been deployed. Panjshir valley is fortified from all sides. “We’ve been here for a long time,” the Northern Alliance said. We have weapons used to fight the Taliban in Soviet times and in the 1990s.