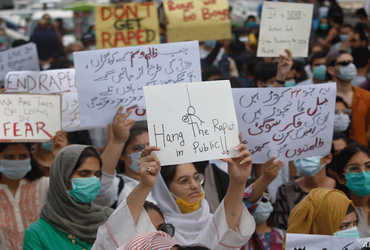 Islamabad: Pakistani women lawmakers have unanimously demanded that all rapists be hanged publicly to reduce the increasing number of cases of abuse of women and children in the country.

According to a local newspaper, the demand was made in the National Assembly by women members of Pakistan Tehreek-e-Insaf (PTI), Pakistan Muslim League-Nawaz (PML-N) and Pakistan Peoples Party (PPP).

The women MPs also called for the formation of a parliamentary committee to review rape cases. Asma Qadir, a lawyer for Prime Minister Imran Khan’s party, said rapists and murderers should be publicly hanged if Pakistan is to be governed properly.

Qadir was crying as he spoke about the recent murder of the daughter of former ambassador Shaukat Muqadam by his own friend in a rape case in Islamabad and rising cases of harassment of women and children.

The issue of violence against women needs to be addressed by lawyers. Mukadam was brutally murdered this month by the son of a business tycoon in a posh area of ​​Islamabad. The killer has been arrested. Preliminary reports indicate that Mukadam was murdered by his friend when he was instigated to demand marriage.