Pakistan will sell arms to Myanmar, China is playing a game behind the scenes 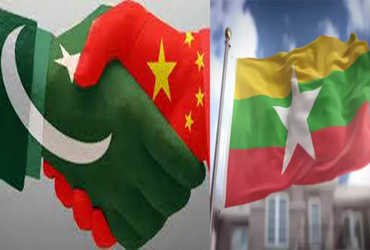 – This is a trick to crowd India from the east

– Crop in Myanmar since the military came to power. That’s right- it’s a Chinese trick

New Delhi: China and Pakistan have joined hands to start the game for a win over Myanmar. Thus China and Pakistan, which are under military ‘jute’, are trying to confront India and its allies from the east as well. That’s why Pakistan has to sell arms to Myanmar. For that a military delegation from Myanmar is going to Pakistan soon.

Myanmar wants to buy 20 and 21 mm mortars M-79 grenade launchers and machine guns from Pakistan. Earlier a high level delegation was to visit Pakistan. Who will inspect the weapons before shipment. China is going behind the scenes in this deal. This is their bargaining game. It is well known that the eastern border of Myanmar (Burma) touches the surrounding areas of Yunnan and China.

Significantly, China can go directly to Myanmar from there. It also has its own arms manufacturing factories (Ordinance-Factory) in Pakistan. Its weapons are being maintained and overhauled in Pakistan.

Bean’s grandson Ai-Ne-Win is behind the entire defense deal with Pakistan. Work on this is going on since last year. Top officials of Pakistan’s Defense Ministry had visited Myanmar in September last year.