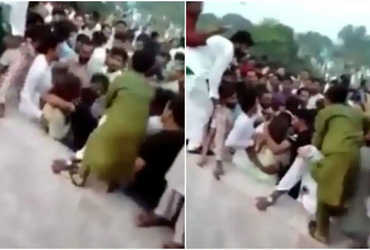 Minorities as well as other citizens of Pakistan are now becoming victims of violence by extremist groups in Pakistan.

A Pakistani woman Tiktokar and her associates have been accused of tearing clothes in public. The incident took place at Greater Iqbal Park in Pakistan on 14 August, Pakistan’s Independence Day.

According to a Pakistani newspaper, a woman Tiktokar was attacked by a mob of around 300 people when she along with six of her associates was shooting a minaret near Pakistan on the occasion of Independence Day. The woman Tiktokar and her accomplices tried hard to avoid the crowd.

The security personnel opened the nearby gate to save the woman. which is usually closed. According to the woman, some people tried to help us but the crowd was huge and the mob with us killed me and snatched my ring and earrings. The mob robbed my colleague’s mobile phone as well as Rs 15,000. The mob also tore my clothes.

Meanwhile, on the basis of the woman’s complaint, the police registered a case against the mob and started investigation.