Pakistan: Temple handed over to Hindus after repair, 8-year-old child vandalized after bail 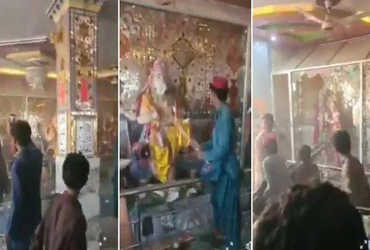 A Hindu temple demolished by a mob in Pakistan last week has been handed over to members of the Hindu community after it was repaired. A government official gave this information on Monday. The district administration official said that local Hindus would soon start worshiping at the temple.

Five days ago the temple was attacked by a group of Muslims in Bhong in East Punjab province. These people ransacked the temple and set the main gate on fire. He was upset that the court had granted bail to eight-year-old Hindu children for allegedly insulting a religious school.

The arrested 8-year-old boy is accused of urinating in the school library where he wrote religious material related to Islam. The mob accused the children of blasphemy, which carries the death penalty in Pakistan.

Dozens were later arrested on suspicion of being involved in the demolition of a Hindu temple and told that they would have to pay for the temple’s repairs. Muslim majority Both Hindus and Muslims live peacefully in Pakistan but the incidents of attacks on Hindu temples have increased in the last few years.