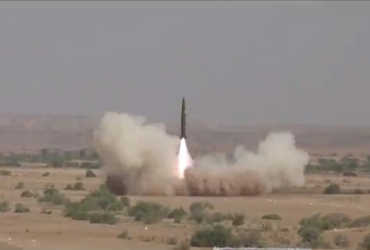 Pakistan on Thursday successfully test-fired a nuclear-capable surface-to-surface ballistic missile, which is capable of hitting targets up to 290 km away. Pakistani President Arif Alvi and Prime Minister Imran Khan have congratulated the army, scientists and engineers on this achievement.

The successful training of the ballistic missile Ghaznavi is aimed at ensuring operational readiness of the Military Strategic Forces Command and re-validating the technical parameters of the weapon system, the Army said in a statement.

According to the statement, the Commander of the Military Strategic Forces Command, Lt Gen Muhammad Ali and other senior officers were present during the trial. According to the media cell of the army, the Ghaznavi missile is capable of carrying a variety of warheads at a range of 290 km.