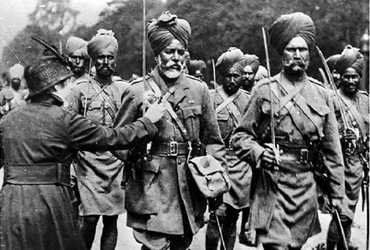 – Documents kept in the museum for 97 years

British historians have found a record of 3.20 lakh Indian soldiers who fought in the First World War in a museum in Lahore. This research has once again proved the massive contribution of Indian soldiers in the First World War. It lists the names of soldiers in and around Punjab. This document has gone unnoticed in the museum for the last 97 years. It is being digitized and uploaded on the website.

Some British families of Indian origin identify their ancestors by the names of the soldiers on record and their fathers, villages and regiments. Those soldiers were involved in wars in Arab countries, East Africa, Gallipoli etc. Many families also shared their 100-100 year old photographs and their interesting cases. Similarly the descendants of British and Irish soldiers have traced their ancestry through records.

Forty percent of the people became soldiers in many villages

Amandeep Madra, president of the UK Punjab Heritage Association, which digitized the documents, said 40-40 per cent of the people from many villages had enlisted in the army. About 45,000 records belong to soldiers from Jalandhar, Ludhiana and Sialkot (now Pakistan).

These records were compiled by the Punjab government in 1919 after the end of the First World War. It has 26,000 pages, some of which are printed by name and some by handwriting. According to an estimate, the digitization of the names of 2.75 lakh jawans of about 25 districts of Punjab and adjoining areas of undivided India will be completed soon.

– The film about World War I, which featured Sikh soldiers in 1917, was considered strange by English actor Lawrence Fox. However, the latter also apologized.

About 1.30 lakh Sikh soldiers are said to have fought in the First World War in the British Indian Army and this figure could be even higher after new research.

– An estimated one-sixth of the British army was Indian Hindus, Sikhs and Muslims. Most of the people of Punjab belonged to all religions.