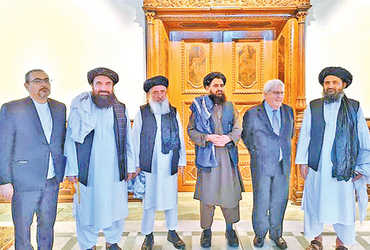 We will fight till the last drop of blood is left in our body: statement by Ahmed Masood, leader of Panjshir commanders against Taliban

Taliban spokesman Zabihullah Mujahid claimed that Taliban fighters had captured Panjshir. However, Ahmed Masood, the leader of the force fighting in Panjshir, denied the claim, saying, “We will not back down against the Taliban until we have the last drop of blood on our bodies.” Our fighters are capable of fighting the Taliban.

Amid claims from both sides, former Afghan MP Zia Aryanzado said that Panjshir had fallen from the Taliban, adding that the Taliban had taken the help of Pakistan’s air force. The former MP claimed that the Pakistan Air Force carried out drone strikes in Panjshir to aid the Taliban, which helped the Taliban take over the province.

National Resistance Front fighters led by former Afghanistan Vice President Amrullah Saleh were fighting, but Saleh is now said to have fled to Tajikistan. Amarullah wrote a letter to the United Nations claiming that the Taliban had cut off supplies throughout the province, but there were reports of his disappearance.

The National Resistance Front has weakened in Panjshir. The terrorist group issued a statement calling for a ceasefire in Panjshir and resolving the issue through dialogue. The decision was also said to be in the interest of common citizens.

Iran has also come forward on the issue of Pakistani Air Force intervention in Panjshir. Iran has opposed Pakistan’s presence in Afghanistan. Iran said in an official statement that no external force would interfere in Afghanistan. Iran also threatened to take action if its interests were harmed.

Meanwhile, the United Nations has called on the Taliban to provide security to UN representatives working for human rights in Afghanistan. Taliban leader Mullah Abdul Ghani Baradar then assured the UN delegation that adequate security would be provided. A statement said Abdul Ghani Baradar met with a UN official.